Funnel cakes for May day--Tippaleipä The first of May, or vappu as it is called in Finnish, is a huge celebration.  The entire country celebrates with street festivals.  The most traditional food for this celebration is funnel cakes, and these are enjoyed with sima, a lemon-flavored mead.  I'm making these a few days early as a surprise for the kids when they come home from school--that way I'll have the photos to post this so you can make them for May 1, too!

I based my recipe on the one in the Finnish Cookbook by Beatrice Ojakangas.  I doubled the recipe because yeast batter keeps well in the refrigerator and you can always make waffles out of the extra for breakfast tomorrow!  For the funnel cakes, you need:

First, warm the milk but don't get it too hot or it will kill the yeast.  Break the eggs in a very large bowl and stir them to break the yolks.  Stir in the warm milk, sugar and yeast.  Add the salt and about half of the flour.  Stir this well--I didn't bother using the stand mixer for this because the batter is much easier to mix than a bread dough.  Then I stirred in the rest of the flour, and continued to stir until it was fully combined.  Next, the recipe said to let it stand in a warm place for about an hour.  Since I have several hours before the kids come home, I just left it on the counter so it would rise more slowly.  After it doubled, I put it in the refrigerator to wait for the school bus to come.  Watch the dough carefully, if it rises too much, you may need to stir it to knock it back down.  Look at how much the batter rose before the kids started coming home! 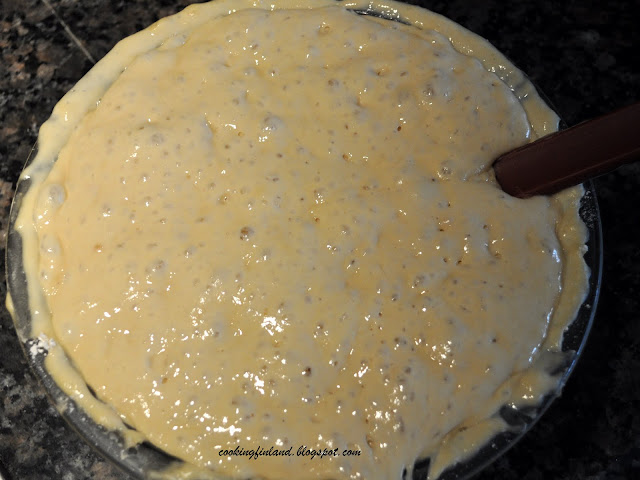 Instead of using a funnel, I used a gallon-sized plastic baggie, and put some batter in it.  I snipped the corner (be careful--the hole doesn't have to be very big!) and used that to squeeze the batter into the hot oil.
To fry the batter, heat oil in a heavy skillet until it sizzles when a small drop of water is dripped in it.  I used canola oil in an old cast iron skillet.  Never leave oil unattended while you are frying!
Squeeze in the dough, it will brown almost instantly.  Flip it with a fork, and let the other side brown also. 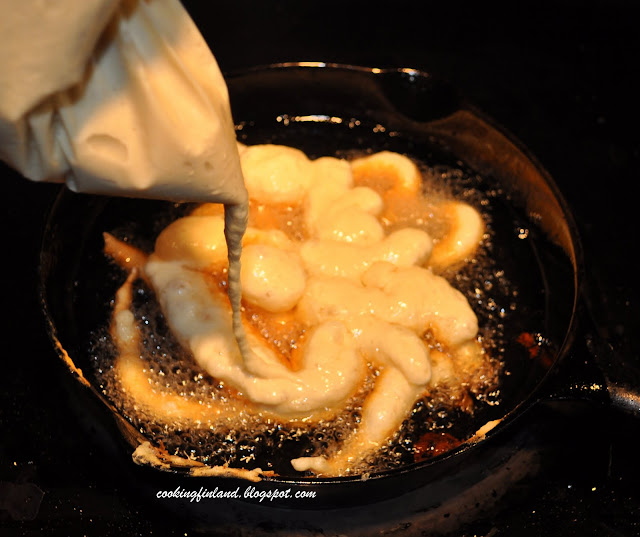 When both sides are brown, use the fork to take out the pastry and set it on a plate covered with a few layers of paper towels to drain.  I always use plain white paper towels for this.  Sprinkle on some powdered sugar and eat immediately!  I wish the Sima was finished to drink with these... 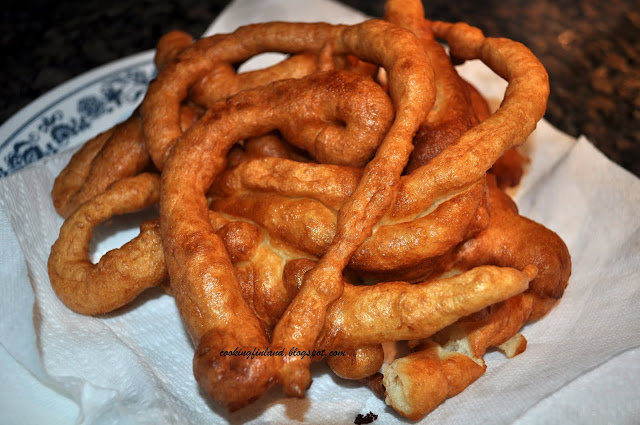 Posted by Elizabeth at 1:07 PM