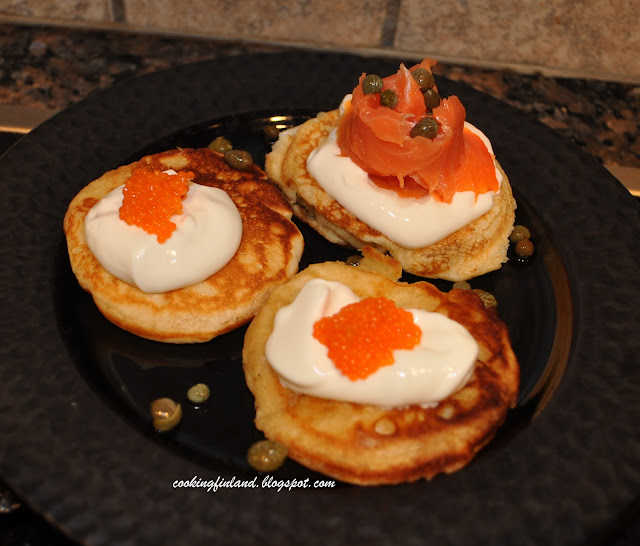 We are back from a very nice spring break, I haven't cooked a thing in over a week!  Actually, cooking and baking are never a chore for me, I find it really relaxing, almost meditative.  I've been wanting to make these blinis for several weeks now, they are often eaten on Fat Tuesday in Finland (also called Shrove Tuesday), according to The Finnish Cookbook by Beatrice Ojakangas.  There is another kind of small pancake more commonly eaten in Western Finland, but I'll be making those later.  Blinnis are originally a Russian dish.  (The internet seems divided on whether to spell it blini or blinni, so excuse me while I alternate the spelling in this post, just to keep the search engines happy!)
The reason I am now able to make these pancakes is that I found a wonderful antique cast iron griddle at Aid's Antique Mall over spring break.  It has the indentations to make Scandinavian pancakes, I brought a non-stick pan back from Finland a couple of years ago, but it is so light-weight that I never use it.  This cast iron pan is worth the extra expense, it is very heavy and cooks beautifully.
Here is the ingredient list that I used, I made a few changes to the one in the recipe book:
one package dry yeast (2 1/4 teaspoons)
2 cups lukewarm milk (4 3/4 dl)
3 cups sifted flour (7 dl)
2 tablespoons sugar
3 eggs, separated
6 tablespoons melted butter
1/2 teaspoon salt
Blinnis are made with a yeast dough, so the first thing I did was warm two cups of milk in the microwave.  Make sure and stir the milk before putting the yeast in it, and don't let it get more than lukewarm or it will kill the yeast and the dough won't rise.  If you don't warm the milk, the dough will take a really long time to rise.  In my microwave it took two minutes, but microwaves vary a lot. 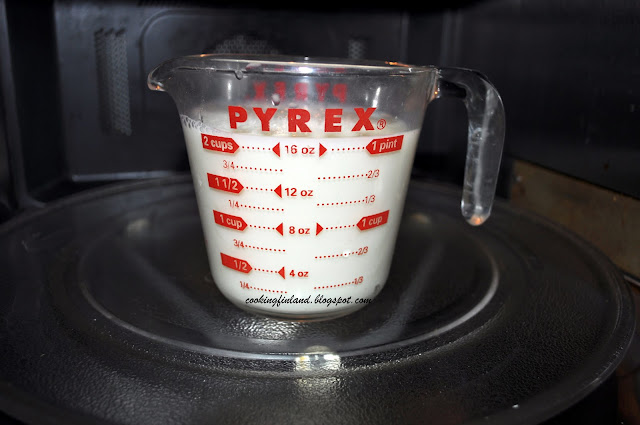 Stir the yeast and sugar into the warm milk. 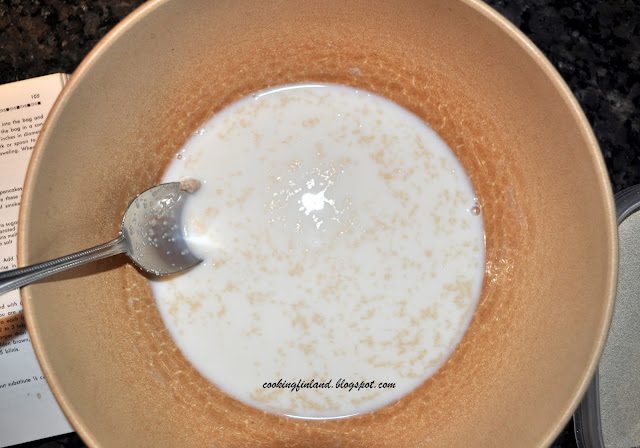 Sift the flour before measuring it, otherwise the amounts will be wrong.  My sifter broke a long time ago, but I use a mesh strainer over a bowl and just shake it a bit, it works great! 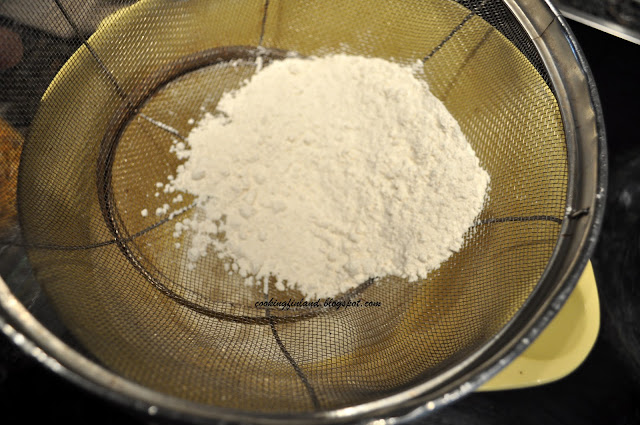 Add one cup (2 1/3 dl) of the flour to the warm milk and mix it well.  The flour didn't dissolve well when I stirred it with a spoon, so I used a whisk.  At this point, cover the batter and put it in a warm spot to rise for about half an hour or until it doubles in volume. 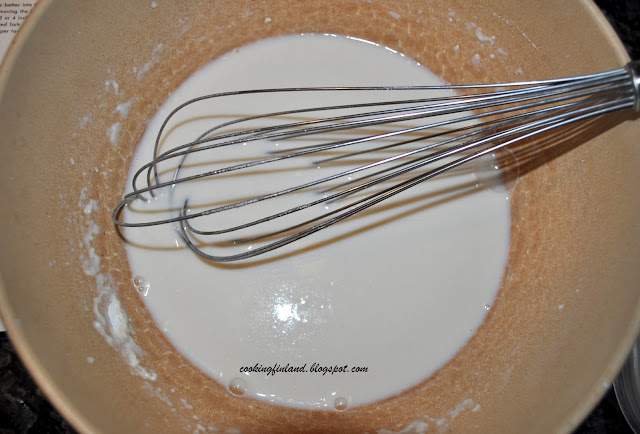 After the batter rises, separate the eggs, yolks from whites.  Break up the yolks with a fork or whisk, and stir them into the batter. 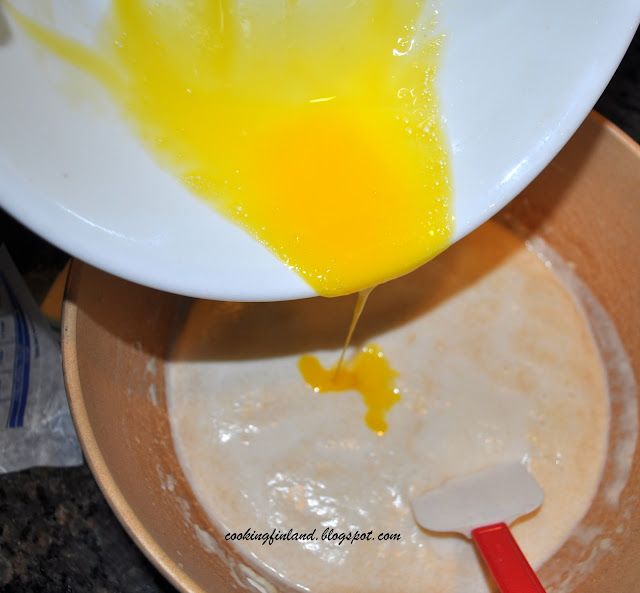 Add the rest of the flour (2 cups or 4.75 dl) and stir well.  Once again, I used the whisk to eliminate any lumps.  Add the salt and melted butter, mixing well. 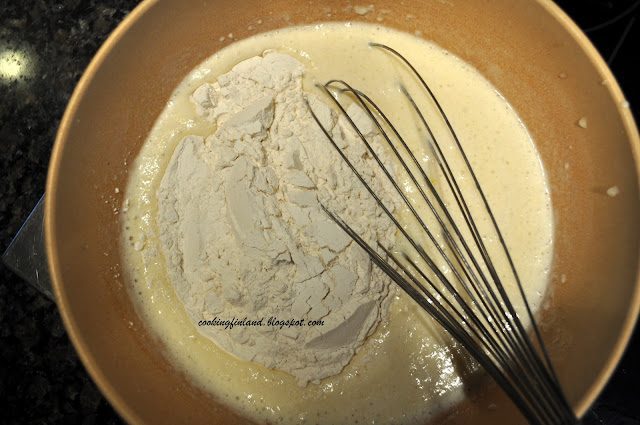 Beat the egg whites until they are stiff. 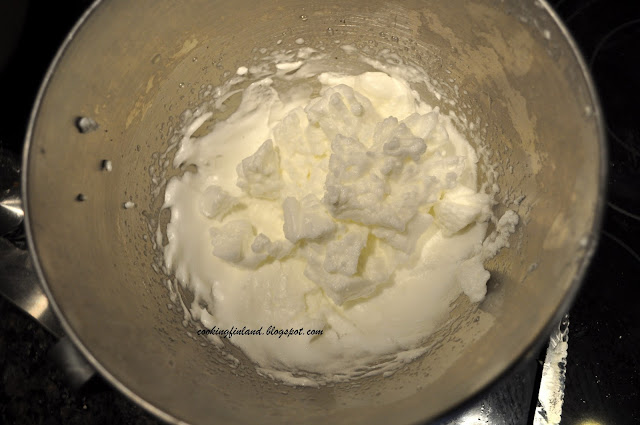 Fold the egg whites gently into the batter, using a spatula to scrape down the sides.  Do not over mix at this point.
Cover the dough again and let it rise in a warm place for another half hour. 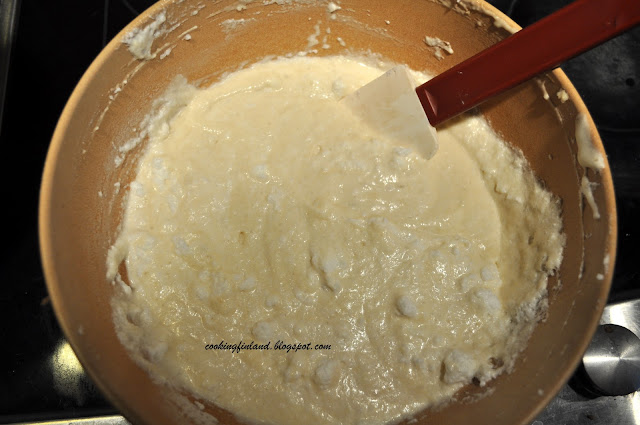 After the dough has risen to about double, it is time to cook the blinis.  I put a little butter in each indentation before putting in about 2 tablespoons of batter.  If you don't have a pan like this, you could make them free form on any griddle but they may not be as perfectly round.  You could place a greased round cookie cutter on the griddle to shape the dough. 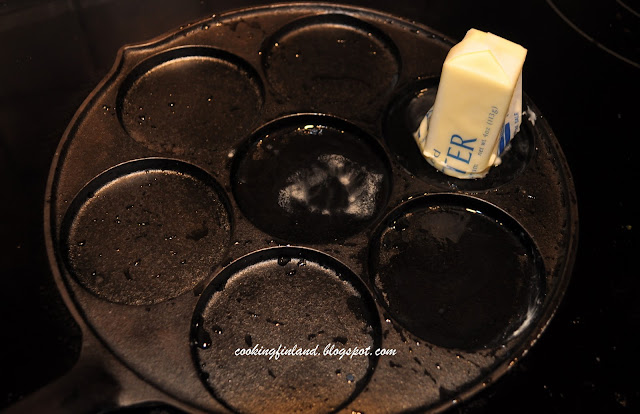 The dough bubbled up nicely when it was time to flip the blinis.  I found that the new pan was so heavy and conducted heat so well that I could turn the heat off to cook the pancakes once it heated up.  I really miss having a gas stove where I could regulate the heat better! 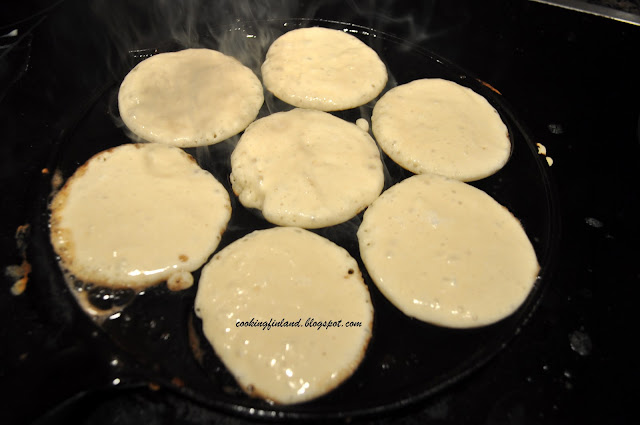 We really enjoyed eating these savory little pancakes!  We put a dollop of sour cream and some lumpfish roe (from Ikea) on them.  The kids liked putting cold smoked salmon on theirs, and we added a few capers.  I doubt capers are very traditional, but the salty taste was really good.
I made an extra batch of the dough because I was afraid we wouldn't have enough for my hungry teenagers, but one batch was almost enough.  If you want to see what I did with the extra batter, check out the post here.
Posted by Elizabeth at 8:05 AM