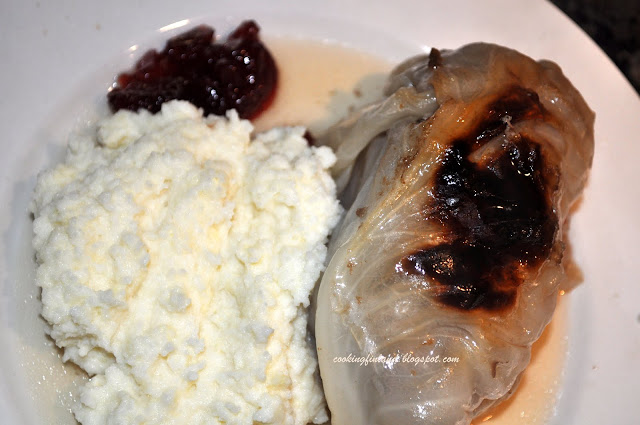 One of my husband's favorite Finnish dishes is cabbage rolls.  These are like a sweeter version of meatballs, wrapped in a cabbage leaf, which should be slightly charred on top.

I had intended to make the cabbage rolls earlier in the week, but we are still very busy with the remodeling project, we are getting a little tired of using the beautiful new sauna in the middle of an unfinished bathroom!    The project expanded a bit, we are converting a useless small hallway into a dressing area and refinishing the closet which we took half of to put in the sauna.  The walls are all back up and covered in drywall.  Now to mud the seams and tile the floor in all three areas.   But first, let me tell you about the cabbage rolls.

First, I put on a large pot of salted water to boil and took a large head of cabbage and cut out the core.  After boiling the cabbage for a few minutes, the leaves start to come off. 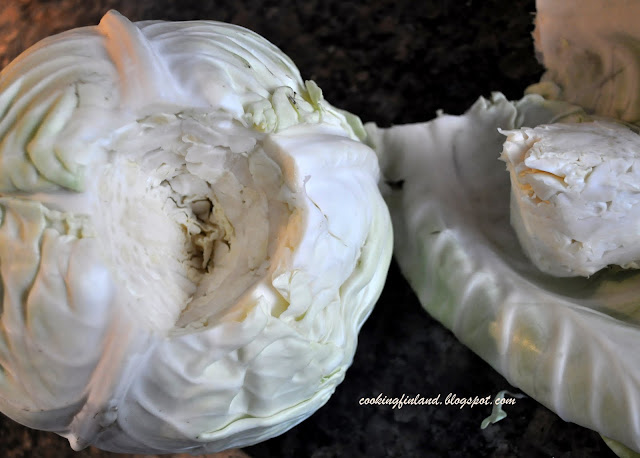 Keep carefully removing leaves as they loosen up, and remove them from the water when they are soft.  My pot was a little small, so I kept turning the cabbage over. 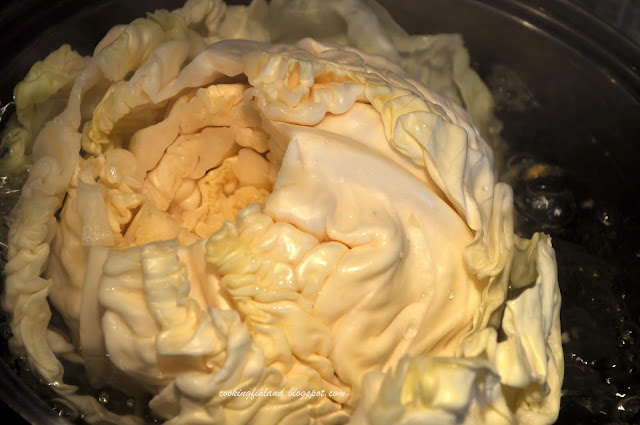 This is what the leaves looked like when they were removed from the water: 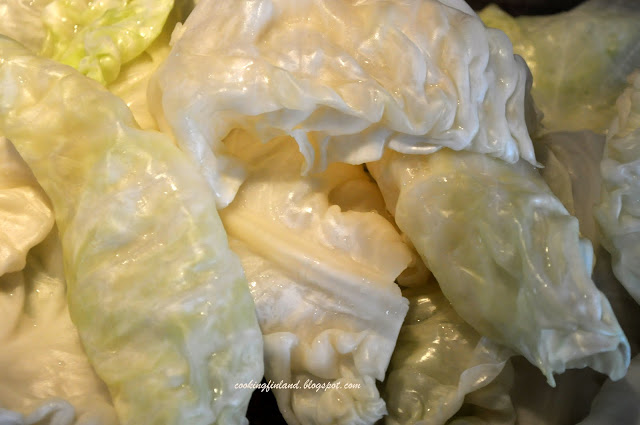 Meanwhile, I boiled a package of barley for about 45 minutes.  This recipe only uses 1 1/2 cups (measured after cooking), but we used the rest to make barley porridge. 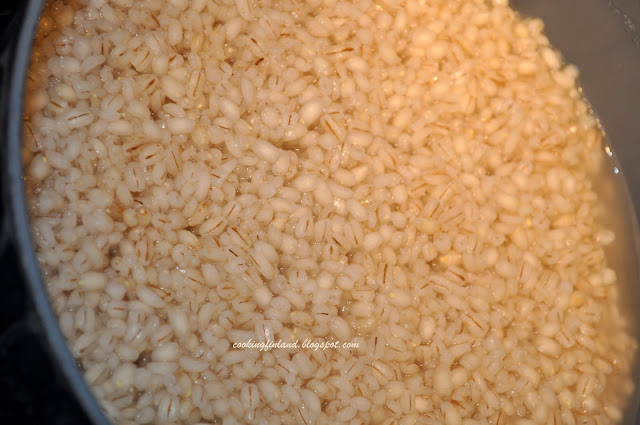 I used the food processor to make 1/2 cup of fresh breadcrumbs, I always keep a bag of spare pieces of bread in the freezer to make breadcrumbs with.   I added 1/2 cup of whole milk, a teaspoon of salt, 1/2 teaspoon of allspice, and a pound  of ground beef.  I let this process for a couple of minutes. 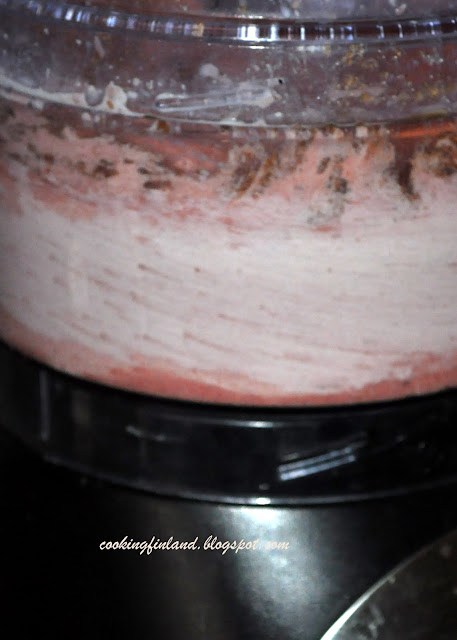 Then I put the meat mixture in a bowl and added the 1 1/2 cups of cooked barley (you could also use cooked rice if you prefer). 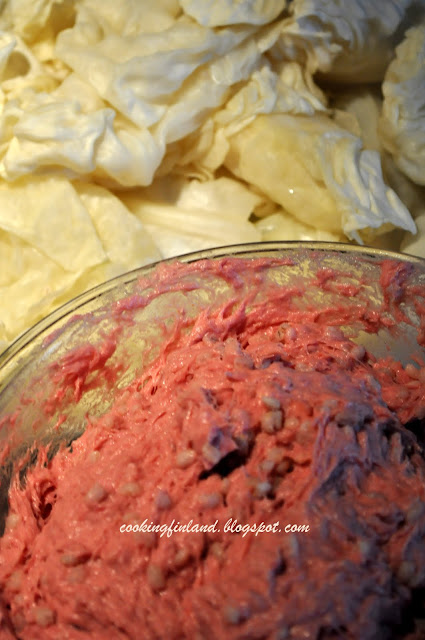 To fill the cabbage leaves, put in a couple of tablespoons of the meat mixture, then fold the top and bottom down just a bit and roll from the side.  The same process as rolling a burrito.  Note that I have the stem going around the roll, it seemed to work better that way. 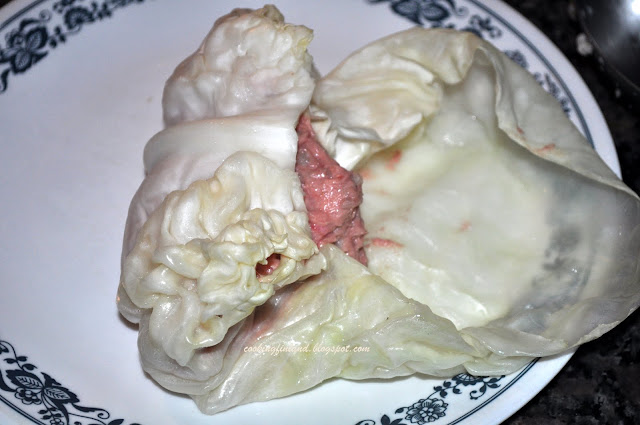 The rolls went into a heavy glass casserole which I had sprayed with cooking spray (you could also butter it).  Next I mixed a half cup of brown sugar with a couple of tablespoons of milk, and drizzled this over the top.  I used a spoon to spread it over each roll.  Then I covered the dish and baked them for 20 minutes at 400 Fahrenheit (200 Celsius).  Then I poured in enough boiling water to almost cover the rolls, removed the cover, and reduced the heat to 350 Fahrenheit and let it bake for one hour. 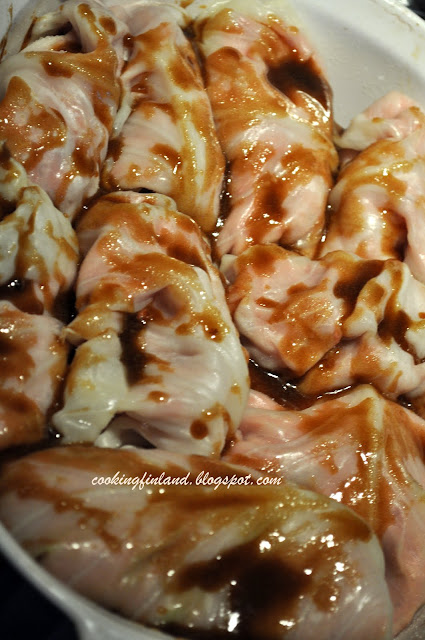 The rolls developed a charred layer on top, according to my husband, this is the best part. 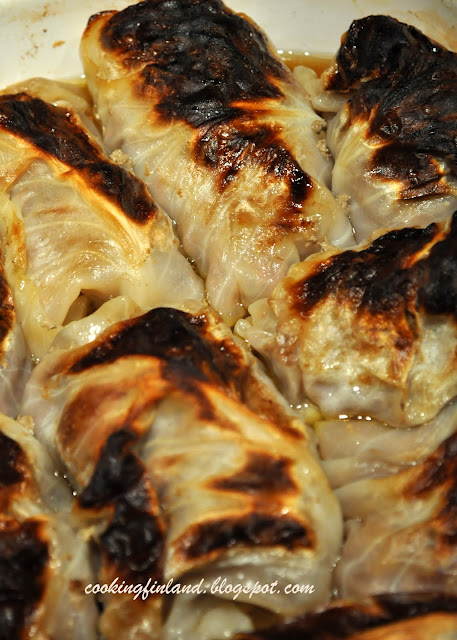 We ate the rolls with mashed potatoes and lingonberries from Ikea.  Or maybe I should say that most of us did.  The youngest said that "I don't like trying new things when I'm sick."  Even telling him that the filling was just like meatballs didn't get him to try them.  My husband proclaimed them a success, and I think I will just leave it at that.
Posted by Elizabeth at 7:34 AM