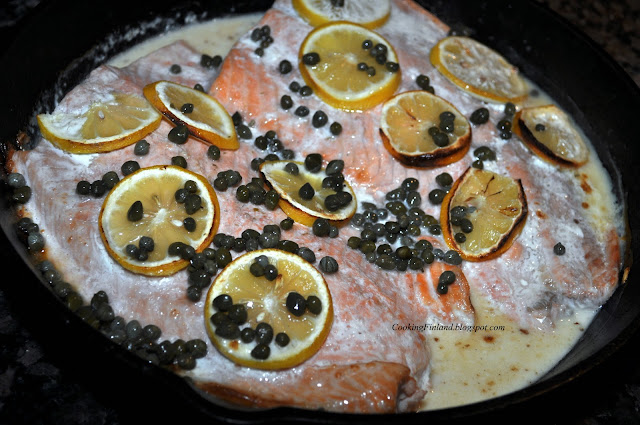 This is the second time I've posted about baked salmon, you can find the other post here.  I just can't resist buying Norwegian salmon when I find it fresh, it really is so much richer than the Chilean salmon we usually have at the grocery.  Scandinavia has the most delicious fish!  This beautiful 3 pound (1.5 kilo) fillet came home with me from Sam's Club yesterday, and I wanted to cook it right away.
This time I baked the salmon in cast iron, I love to cook in cast iron when I can.  I have to admit that this is a fairly new cast iron pan, none of my Grandmother's pans were large enough to hold this much fish.  But I've used the pan enough that it is well-seasoned.
First, I rubbed the pan with olive oil (you could use any vegetable oil if you want, I don't really think it matters as much as the chefs on TV would like for you to believe!).  I stuck the pan in the oven and preheated it to 450 degrees Fahrenheit (that is about 230 degrees Celsius).  Be careful taking cast iron out of the oven when it is that hot--and NEVER use a damp potholder because the dampness will conduct heat.
While the pan was heating, I cut the fillet in half so it would fit an rubbed both sides with smoked sea salt.  I've tried a lot of the different sea salts available now, and smoked salt is definitely my favorite for meat.  It is a little hard to find, but worth the effort.  I also sliced two lemons to put on top of the fish.
After the pan was heated, I took it out of the oven and put in the fillets, it started to sizzle immediately.  I quickly put the lemon slices on top and poured just a little cream around the edges, as is typical in Finnish cooking.  When you bake a big piece of fish, it is important to have some kind of liquid in the pan, this helps the fish cook more evenly. 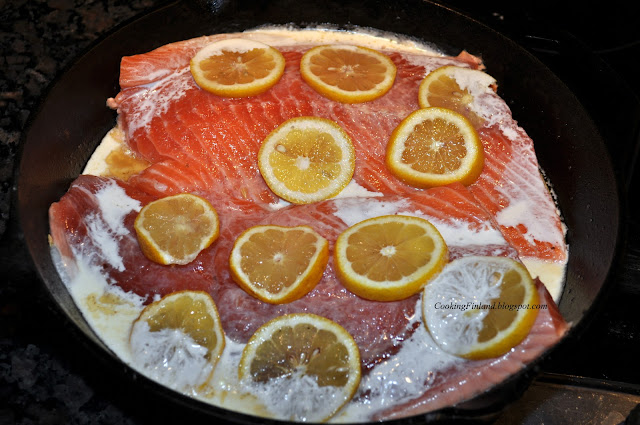 The fish was perfectly baked after 15 minutes.  Be careful, salmon gets dry if it is overcooked.  The thickest parts of the fillets should be slightly raw looking in the middle when you take it out of the oven, This will go away when it sits for five minutes before eating, especially if you are using a heavy pan like this.

I sprinkled capers over the salmon, and we ate it with potatoes and mixed vegetables cooked with a little chicken bouillon.   Would you hold it against me if I admitted that the "potatoes" were actually french fries?  The cream sauce around the fish would be incredible over pasta.
Posted by Elizabeth at 7:46 AM