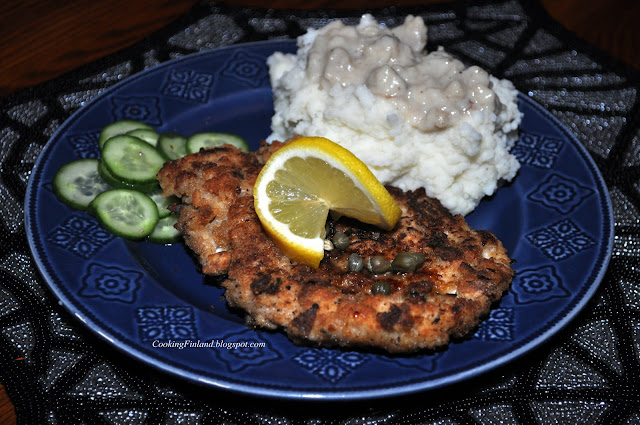 With Oktoberfest celebrations all around, we have really been in the mood to eat German food.  Both of my older kids are studying German in school, and enjoy all of the food-based celebrations.  In Finland, schnitzel or weininleike has been a popular lunch dish at restaraunts, usually served with lemon slices and capers and mashed potatoes or french fries on the side.  My husband has really been missing this dish, he ordered it at a German restaurant the other night, the most expensive dish on the menu!  Of course, the German restaurant served veal schnitzel, but in Finland it is most usually made with pork.  I prefer pork for many reasons.
I started with a whole pork loin that I bought at Sam's club for about $16.  I usually buy the smaller ones, they come from smaller animals and are generally more tender.  I cut the loin in four big pieces and refroze each piece individually--each piece is enough for one meal for our family of big eaters plus plenty of leftovers.
To make the loin into pork chops, I thawed it until it was still slushy and frozen in the middle, partially frozen meat is much firmer and easier to cut up.  I used a very sharp serrated knife to cut the thin pork chops.  I cut them fairly thin so the schnitzels wouldn't be too big when they were pounded out. 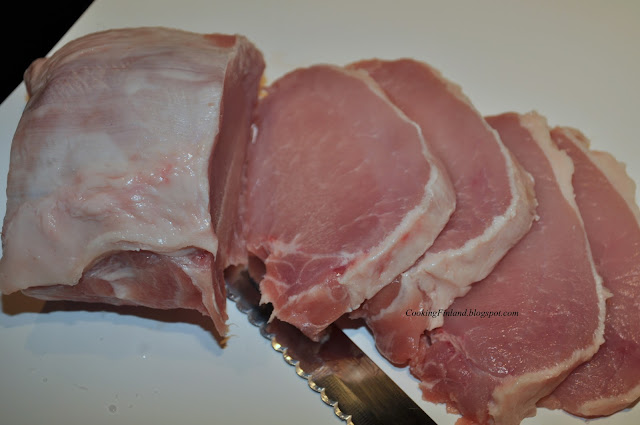 The serrated knife I used is really a bread knife, but I think it cuts partially frozen meat much better than my other knives, the teeth really dig in.  After the chops were cut, I laid them on a metal cookie sheet to quickly finish thawing (about 5-10 minutes).  Everything thaws quicker if you lay it on metal--the metal conducts heat away from the food.
Next, to pound out the chops, I've been using my heavy rolling pin, but today I used my new meat mallet that I bought just for this (my family has been wanting schnitzel every night lately!).  The rolling pin works fine, but it is sometimes hard to get the chop as even with it.  Cover the chop with plastic wrap before pounding it out, otherwise the kitchen will be splattered!  After pounding out the chops, I salted them a little and put them in the refrigerator until closer to dinner time. 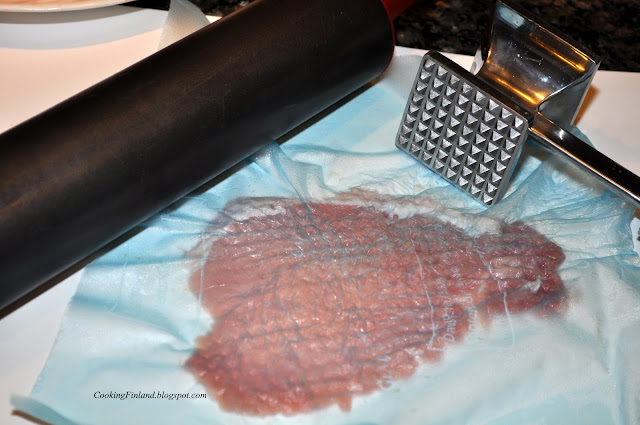 About 45 minutes before dinnertime, I prepared the coating.  On the first plate, I put 1.5 cups of flour (3.5 dl) and seasoned it with salt and pepper.  In the bowl, I mixed 3 eggs and 1/4 cup of milk (0.5 dl).  On the last plate, I put about 2.5 cups of bread crumbs (6 dl).  I make my own bread crumbs from all the odds and ends that the kids don't eat--I keep a bag of bread bits in the freezer and when I have enough I run it through the food processor.  You could also use any dry bread crumbs--panko Japanese bread crumbs would be delicious.  I based this recipe on one by Tyler Florence, you can find it here.  Lightly season the bread crumbs with salt and pepper, too. 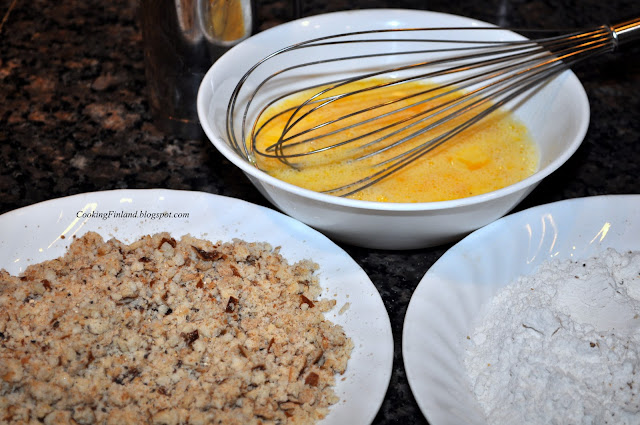 Coat the chops completely in flour, then carefully shake off the excess.  Dip the chop in egg and coat it liberally in bread crumbs.  At this point, I laid them in individual layers on cookie sheets.  Letting them rest for 10 minutes is supposed to help the coating stick better.

After 10 minutes, I heated olive oil and a little butter in a cast iron frying pan.  Cast iron is great to cook in because it holds heat so well and heats so evenly.  I put in a few sprigs of thyme and was really careful not to overheat the butter.  Burnt butter is not a good flavor! 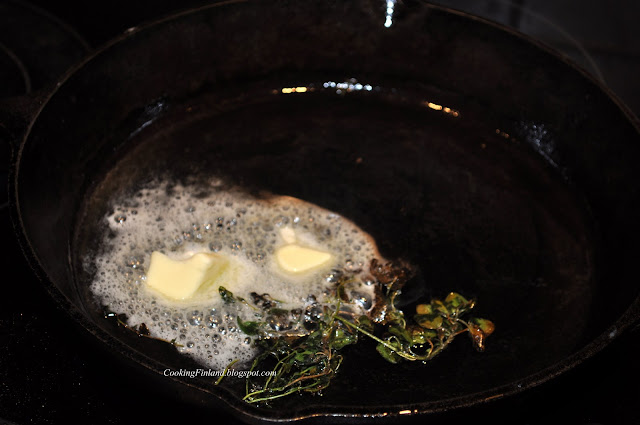 I took out the thyme and put in the schnitzel two at a time.  I barely browned them on each side and then put them back on the cookie sheets.  I had to add olive oil and butter to the pan as I added more schnitzel.  When all of them were browned, I put the cookie sheets in the oven for about 20 minutes to finish cooking.  That way all my schnitzel were done at exactly the same time.  You could also cook them completely in the skillet, but for a big family, it is so much easier to use the oven. 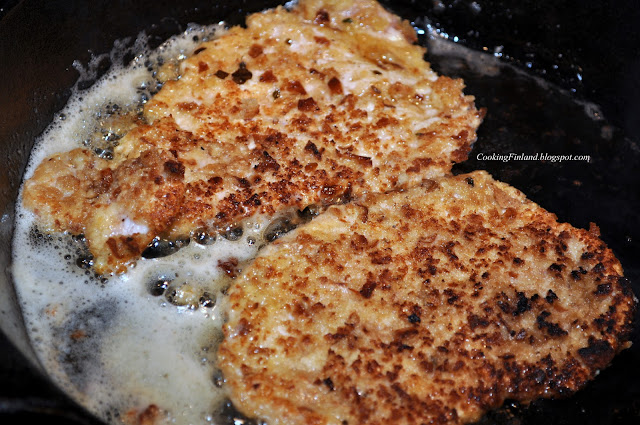 I used the drippings from the skillet and the left-over flour to make a pan gravy.  First, I browned the flour in the pan, then added milk, stirring rapidly.  I added a little Knorr beef bouillon and pinch of brown sugar.  The gravy was delicious on mashed potatoes, but I also baked a few french fries for my husband...
Don't forget to give everyone a slice of lemon to squeeze over the schnitzel.  And a few capers make this dish authentically Finnish.  I've made the pork version twice, and last night I made it with boneless, skinless chicken thighs.
My husband said it was just like in Finland.  The kids just wanted to know if they could have it again tomorrow...and the teenager even smiled.  No better compliment than that!
Posted by Elizabeth at 7:43 PM