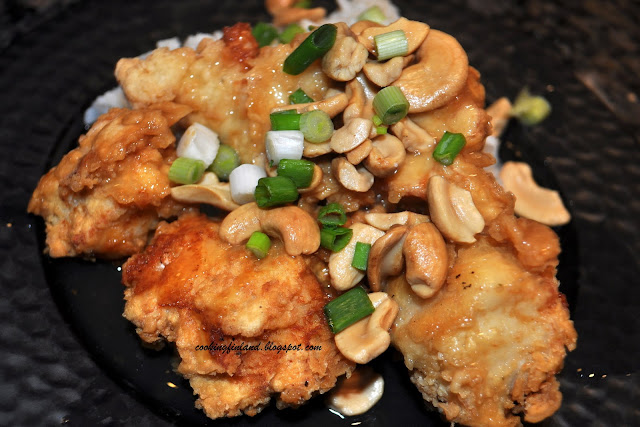 Last night I was discussing food from the Missouri Ozarks with some friends on Facebook.  Anthony Bourdain has a show where he visited my home town of West Plains, Missouri (airing next Monday on the Travel channel).  You can find the link to details about the show here.  His show is known for trying really exotic food, in West Plains he skins his own squirrel for squirrel pot pie.  What he really should have been showing is one of the best foods to come out of the Ozarks, cashew chicken.  A lot of my friends asked for the recipe, so even though it has nothing to do with Finland, here it is...

This chicken also has nothing to do with China or Chinese food, except that evidently a Chinese restaurant in the area invented it a long time ago.  You can't get this dish anywhere else in the U.S., as far as I know.  They have cashew chicken on some Chinese restaurant menus here in the north, but it is a very different dish, with unbreaded chicken, hot peppers, and cashews cooked in the sauce.  My Mom has been making this at home since I was a kid, so I called her and got the exact recipe.

Here are the ingredients that I used to make more than enough for the five of us:

3 pounds boneless, skinless chicken (1.3 kg)
3 eggs
3/4 cup milk (1.75 dl)
1/2 teaspoon salt
1/4 teaspoon pepper
flour to coat the chicken twice
frying oil, the recipe called for peanut oil, but I used canola oil
For the sauce:
3 cups of water (7 dl)
3 chicken boullion cubes (if you use the Knorr cubes like I did, they make 2 cups each, so only use 1.5)
6 tablespoons cornstarch
6 teaspoons sugar
3 tablespoons oyster sauce (or substitute soy sauce)
Cashews, green onions and rice.
I started by cleaning and cutting up some green onions: 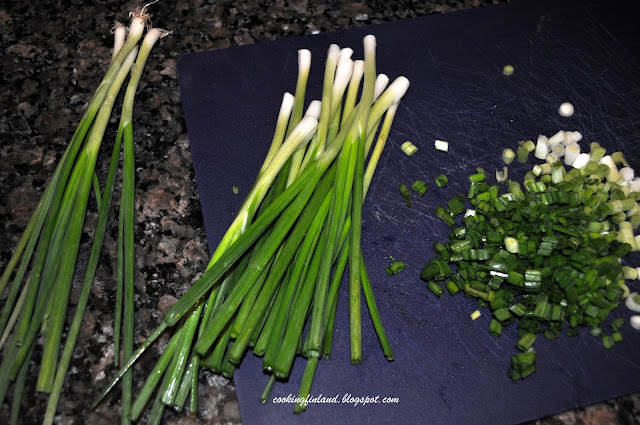 I cooked rice in a rice cooker.  We ate it with plain rice tonight, I'll post my fried rice recipe another time.  (This post already has so many photos!) 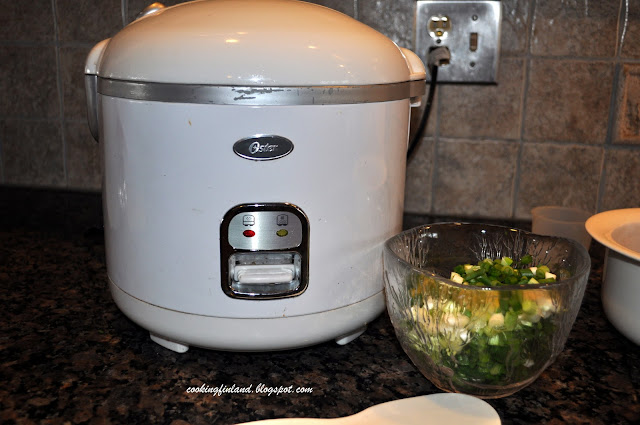 The chicken breasts I used were frozen.  They cut up really well while they are still partially frozen.  I laid the chunks on a jelly roll pan to thaw more.  Meat thaws quicker if you lay it on something metal.  Don't make the chicken chunks too big, they get a lot bigger when you bread them. 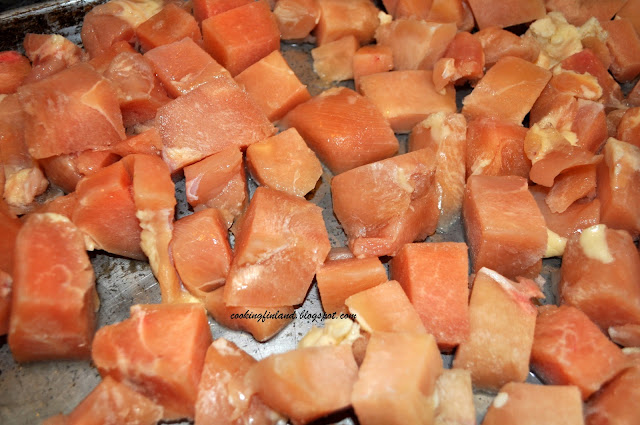 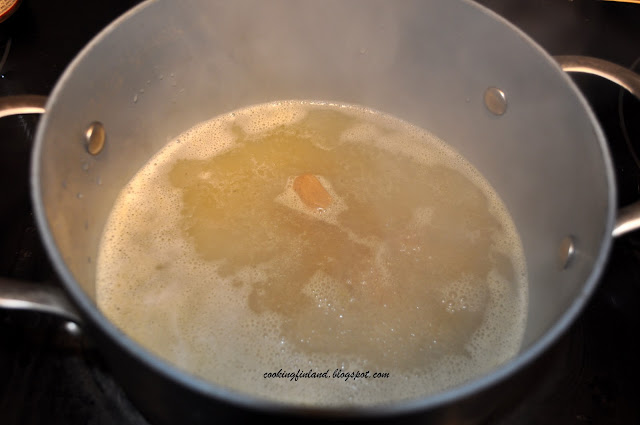 Stir the cornstarch, oyster sauce, and sugar into the other half of the water.  Make sure to mix it well. 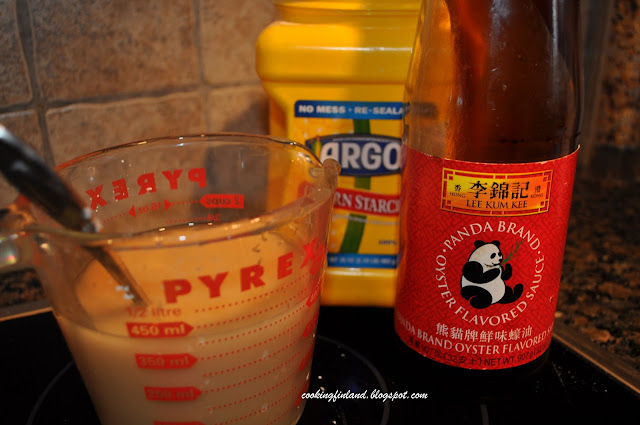 Pour the mixture into the boiling water, stirring constantly so it stays smooth.  Continue stirring and cooking until it boils again. 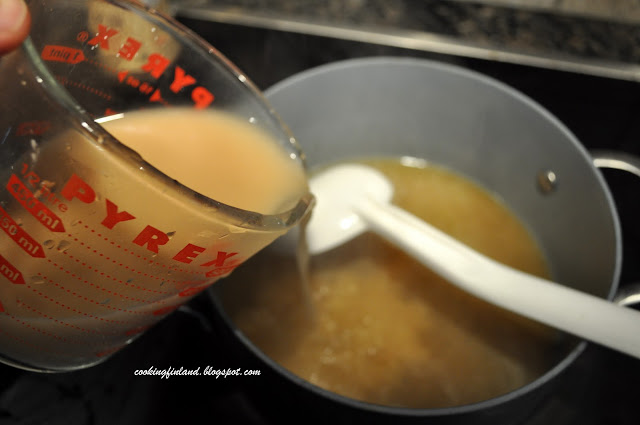 When it comes back to a boil, the sauce will become more transparent and thicker. 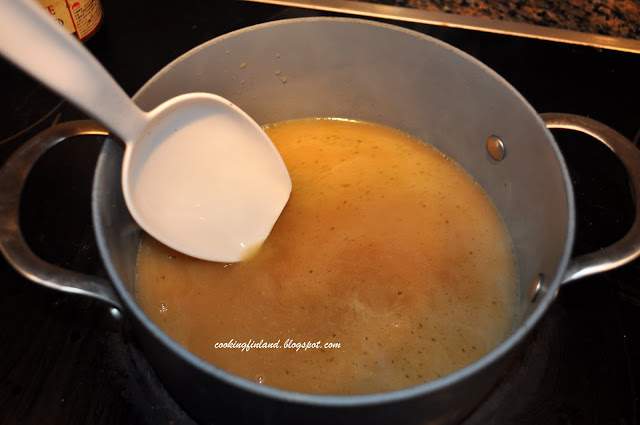 While I was making the sauce, I put flour on the cubed chicken.  I didn't measure exactly, but it was probably about a cup of flour.  Just coat them really well.  Let the chicken sit for 15 minutes at this point.  The jelly roll pan was a great container to do this in. 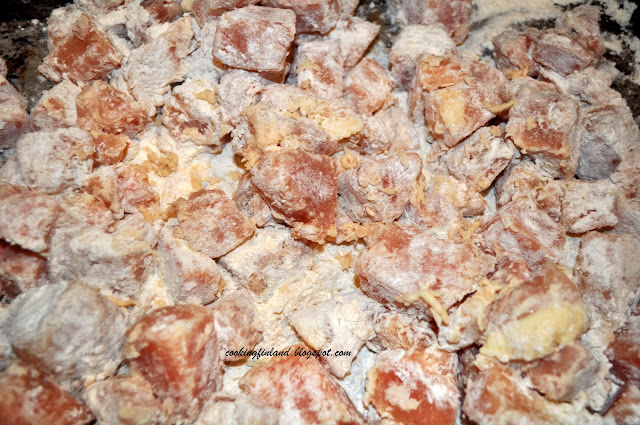 Break the three eggs in a large mixing bowl.  Stir them well, then stir in the milk, salt, and pepper.  Did you ever notice how hard it is to break up egg yolks if you don't break them before you add the other liquid?

While the chicken is in the egg mixture, put a cup or more of flour on the jelly roll pan that you had them on before.  Dip the wet chicken nuggets back in this flour before frying them. 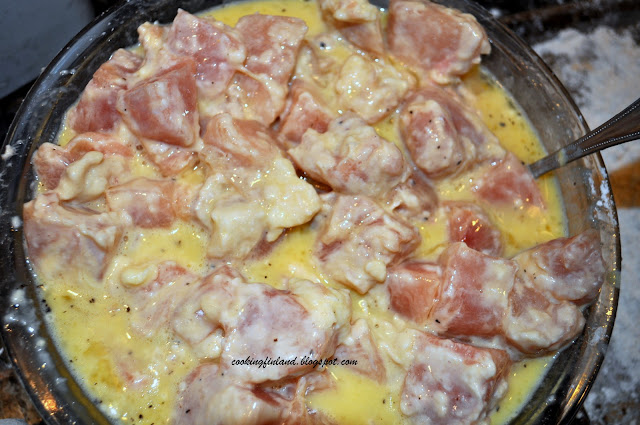 Heat the oil in a heavy pan.  Test the temperature by dropping a bit of the breading in the oil, when it bubbles and floats the oil is ready for the chicken.  If you put the chicken in before the oil is hot, it will get too greasy.
I used my Grandma's old cast iron skillet.  You need quite a bit of oil, a deep fryer would also work great.  I used canola oil, but the recipe specified peanut oil.  Peanut oil would have been good to use, it has a higher smoking point, but I didn't have any.  Don't overcrowd the pieces in the pan.  It takes a while to fry all the chicken... 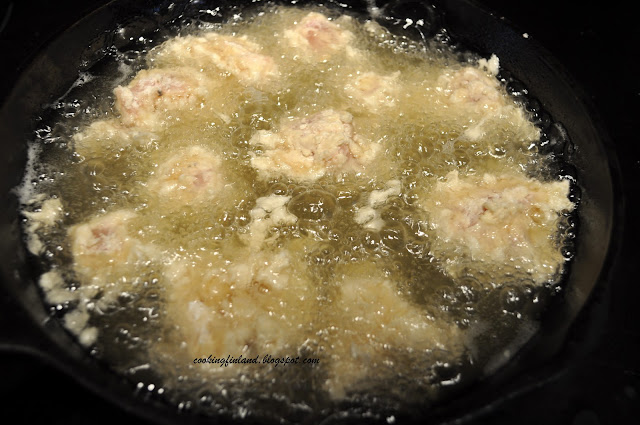 I have a very unscientific method of testing the chicken for doneness...I pull out the biggest piece and cut it in half.  If it is done, then they will all be done.  I like to use chopsticks to turn and remove fried food, but tongs or even a fork would work.  Drain the chicken on a plate covered with paper towels. 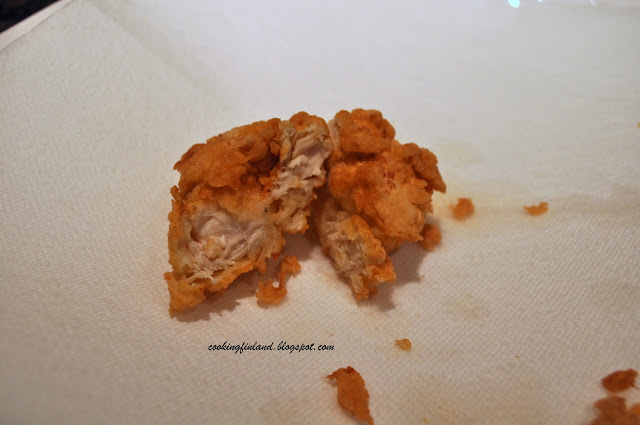 Serve the chicken immediately.  We like to assemble the dish on our plates, rice, then chicken.  Pour the sauce over the top and sprinkle with green onions and cashew pieces.  There is something about the combination of cashews and green onions that is irresistible!

One last warning, it is very easy to eat too much of this dish!
Posted by Elizabeth at 9:27 PM