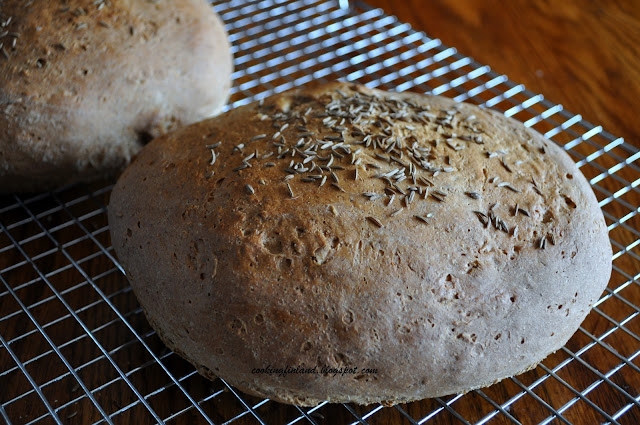 We've been waiting all week to cook a package of corned beef, and it smells so delicious in the slow cooker.  To go with it, I decided to make some good old American rye bread today, in addition to the soda bread.  I used another of Beatrice Ojakangas' recipes from Great Whole Grain Breads.

To make 2 round loaves, the ingredients are: 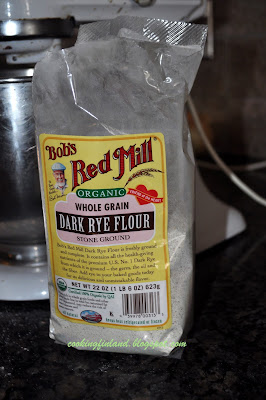 In the bowl of my stand mixer, I dissolved the yeast in the warm water, and added the caraway seeds and brown sugar.  I used more yeast than the recipe called for--for this amount of liquid, I always use the equivalent of 2 packages of yeast.  I also added a bit more brown sugar, because we like a sweet molasses flavor in rye bread.  Make sure your water isn't too hot or it will kill the yeast and the bread will not rise!  I use tap water which I warm for one minute in the microwave.

Yeast bubbles in warm water if it has a little food source, in this case the brown sugar.  If it does not bubble after 5 minutes, the yeast may have been old, or the water too hot.  The bubbles make the bread rise. 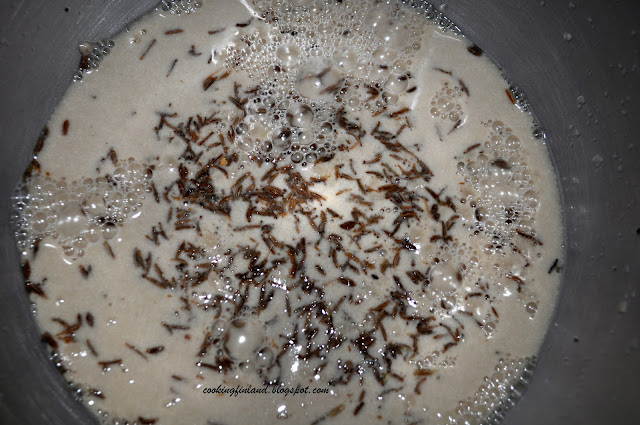 I mixed in the two cups of rye flour with the dough hook of the mixer and then scraped down the bowl with a spatula: 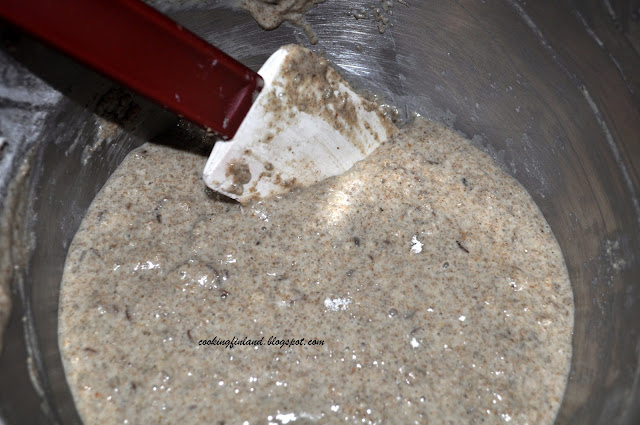 I added the white flour a half cup at a time while mixing with the dough hook.  Here is what it looked like after 1 cup: 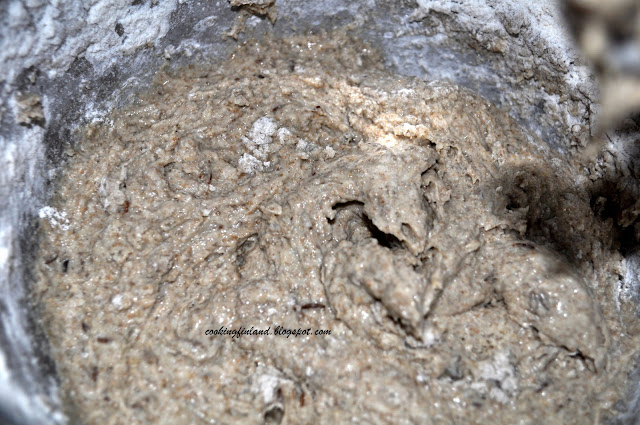 It was still a little sticky after 2 cups: 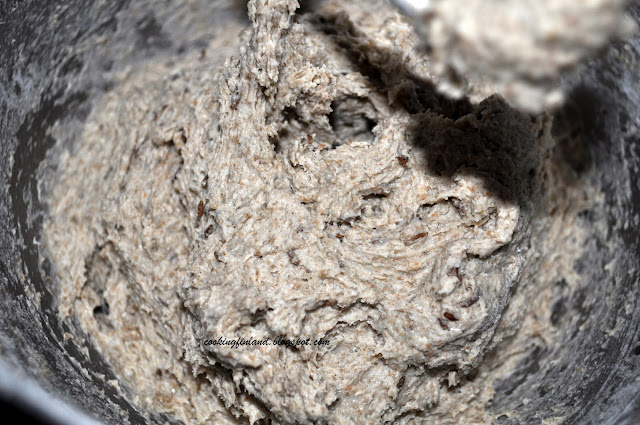 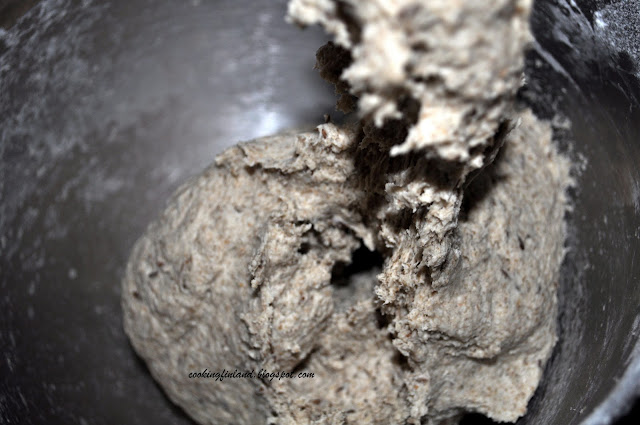 I put the dough in a greased, non metal pan to rise.  I greased it with just a bit of cooking spray, then I sprinkled the dough in the bowl with a bit of flour before pulling it out and shaping it into a ball.  Sprinkle the top of the dough with flour so it doesn't stick to the dishtowel it should be covered with as it rises.

Put the dough in a warm place for about an hour, or until it is double in size.  I used a warming drawer, but the oven works well, too, if you turn it on as low as possible, let it heat a few minutes, then turn it off and put the dough in.  Or you could put a big bowl of hot water in a cold oven next to the dough. 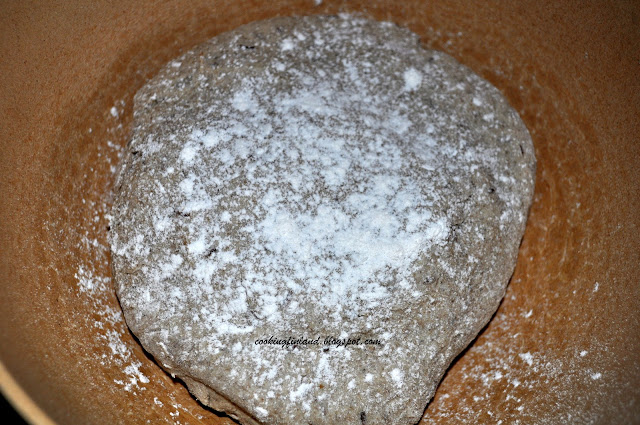 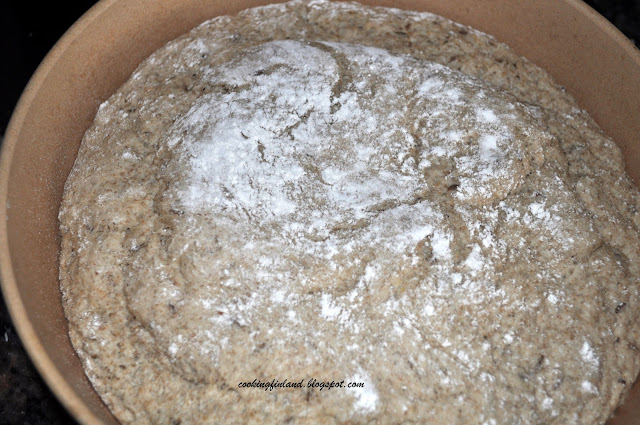 After punching down the dough, I shaped it into two round loaves, and put those on parchment to rise, covered with a clean cloth.  After about half an hour, the loaves were twice as big, so I brushed them with milk and sprinkled caraway seeds on top.  Preheat the oven to 375 F (200 C) and bake for about 35 to 40 minutes, or until they sound hollow when tapped.  Cool on a rack. 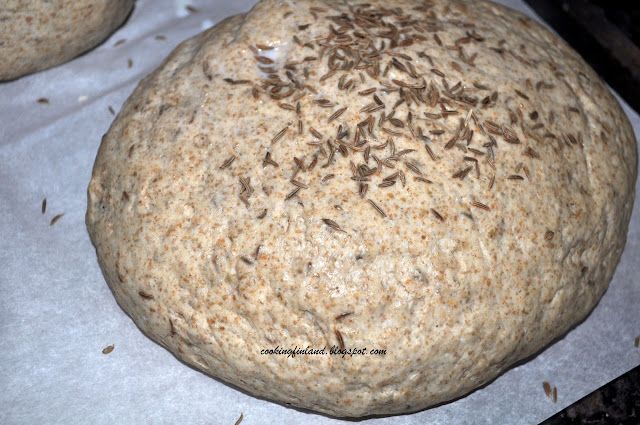