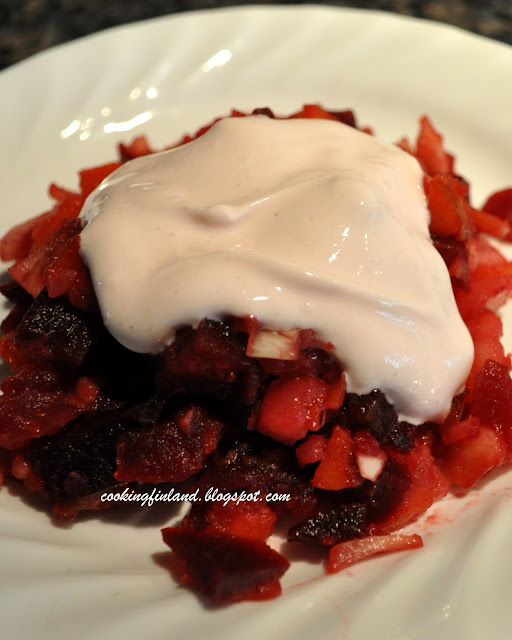 Today I'm busy making Christmas dishes, so I'll probably have at least a couple of posts.  This one is a beet salad that is a very classic Finnish dish.  My kids who tried it (the youngest refuses to eat pink food), said that it tastes like potato salad, and really liked it.  My husband ate several plates full and said that it is much better than what they sell already prepared in Finnish grocery stores.
First, I boiled 5 carrots, 2 potatoes, and three very large beets.  The carrots were done quickly, and I took them out after just a few minutes.  Then I took out the potatoes and left the beets boiling until they were soft.  If the beets were peeled or cut, I wouldn't have boiled them all together, the beets would have turned all the other vegetables red!  While these were boiling, I finely diced one peeled onion and two tart (Granny Smith) apples. 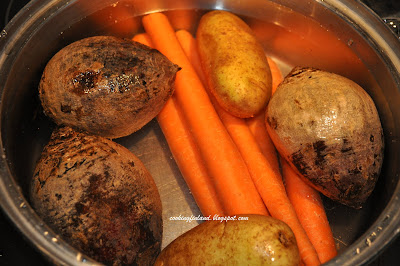 When the cooked vegetables were cool, I finely diced them, then stirred in a couple of tablespoons of sweet pickle relish.  I also added a little finely chopped pickled herring, but you could leave this out if you want. 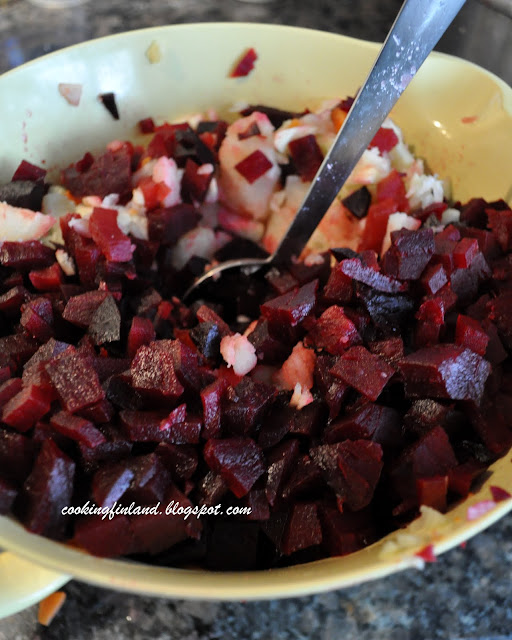 Next, I made a dressing out of one pint of sour cream, the juice of one very small lime (it should have been a tablespoon of lemon juice, but I forgot to buy lemons), two tablespoons of sugar, a dash of white pepper and a dash of salt.  I stirred a few pieces of beets into the sour cream to make it pink, I think my sons would have liked it better white!  To serve, you can pour the dressing over the salad, but I let everyone put the dressing on their own serving this time.  It was delicious!
Posted by Elizabeth at 11:14 AM