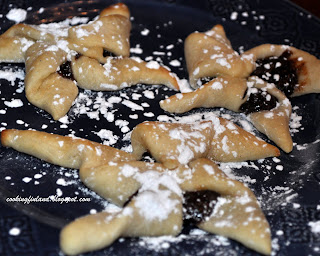 Tonight we made one of the most traditional Finnish Christmas cookies.  Star-shaped tarts made of puff pastry and filled with prunes.
First, put a bag of prunes in a pot with enough water to cover, add a half-cup of sugar per pound,.  Cook until the prunes are soft, then process in a food processor with as much of the cooking liquid of as necessary to make a thick paste.
Next, follow the directions on the puff pastry package to prepare the dough.  Sometimes I make the pastry myself, but this year I am just too busy, plus I found these new crescent roll sheets at the grocery.  They are refrigerated, and make it so easy to make just a few tarts at a time.  Of course homemade with real butter would be better, but by using purchased dough, these are probably the easiest Christmas cookies we will make. 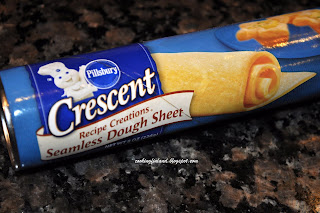 First, my helper took the dough out of the package and unwrapped it. 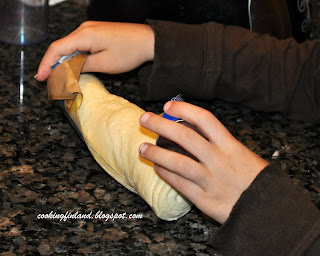 After unrolling the rectangle of dough, he cut about 3 inch squares.  The pizza cutter worked wonderfully for this, and is a great way for kids to do it all by themselves. 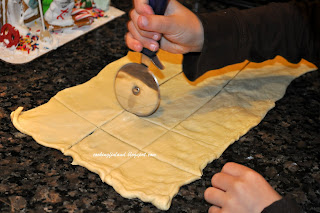 Then he cut lines from each corner, but not all the way to the middle!  Next I put a dollop of the pureed prunes in the middle, he said that he didn't want to get it on his fingers... 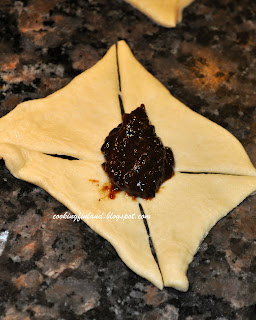 He folded the corners toward the middle to make a pinwheel, then we baked them at 400 degrees Fahrenheit for a few minutes until they were brown and crispy.  A sprinkling of powdered sugar finished them off.  He made half of the batch, his sister took over and made the other.  I got to take a break and watch. 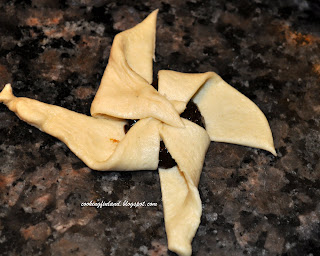 Everyone loves these tarts, even my six-year old pastry chef who wouldn't touch the filling.  Next time we will make a double batch so there will be enough for Daddy!
Posted by Elizabeth at 9:49 PM