My daughter absolutely loves St. Lucia's day.  Since she has two brothers, one older and one younger, this is her day to show off a bit.  My boys have no interest in being star boys, as the boys in Finland often do on December 13.  But my daughter loves to dress in a white robe and put a wreath of lingonberries and candles on her head (we never light the candles).  A red belt made of a ribbon completes her costume.  If you are interested in the legend of St. Lucia, you can read about it on wikipedia here.   Wikipedia does a fairly good job explaining the real tradition, I'll just describe the holiday as it happens here in our transplanted, half-Finnish family.  We just see it as another fun way to celebrate during the dark winter. 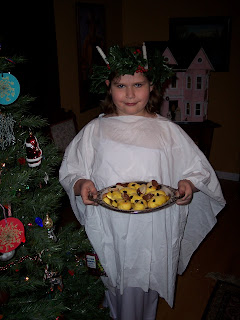 This is a picture from 2008, we haven't had the big event yet today where she serves her dad the traditional lussekatter saffron buns. Usually she just dresses up and we get a good picture before she sets the buns down for her brothers and father to devour.  The fun part for the kids is making the buns.  I'll post the recipe now in case you want to bake along today.  Once again, I am converting to U.S. measurements, but I'll leave the metric in parenthesis in case anyone in Europe wants bake too.

1 beaten egg to brush on before baking
raisins to decorate

Melt the butter and warm the milk to about 120 degrees Fahrenheit (37C).  Be careful that the liquid is not too hot or the yeast will be killed and the dough will not rise.  Dissolve the yeast and add the salt, sugar and saffron.  Stir until all is dissolved.  If you want to, you can add an egg at this point to make the dough easier to handle.  I think I will try adding it today, only because I have a lot of eggs in the refrigerator.

Stir in so much flour that the dough pulls away from the edge of the bowl.  Sprinkle a little flour on top, cover with a cloth, and allow to rise in a warm place until it doubles, about 45 minutes to one hour.  I love to make bread in my Kitchenaid mixer with a bread hook, it makes it so much easier to knead.

After the dough has doubled in size, knead it for a few minutes on a floured surface, and put in the rest of the flour.   To make the traditional buns, make a thin  rope out of the dough, about 5 inches long.  Curve this rope into an S or 8 shape (without the spaces within the S or 8) .  Put a raisin in each of the two indentations of the bun.  I like to make the buns kind of small, kids seem to be more willing to try something small.

This is the public image from Wikipedia of the bun shape.

Well, I am off to bake now, I'll post pictures and give an update when the buns are finished.  Hope you have good luck with baking these delicious buns, too!