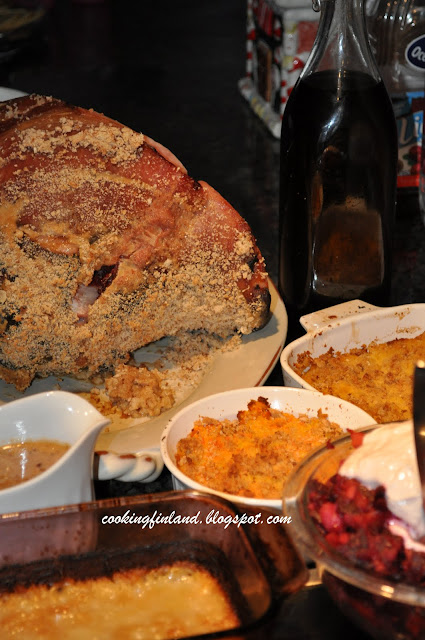 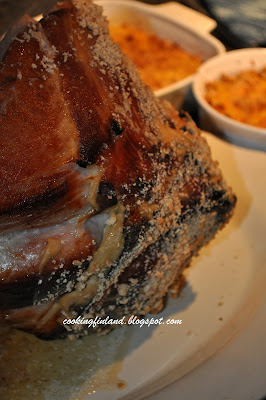 For Christmas Dinner, we had a delicious ham, I cooked a shank ham for a couple of hours in a 350 degree Fahrenheit oven (to an internal temperature of 175 degrees, then poured off the drippings and coated it with brown mustard and sprinkled on some dry bread crumbs.  Back into the oven for a few minutes, it developed a delicious crust.  A half-cup of the drippings went into a sauce pan with a half-cup of cooked and pureed prunes and a half-cup of water.  After this cooked a few minutes, I added a half-cup of cream which was mixed with a tablespoon of corn starch.  The gravy was excellent on the ham, this was probably the best ham we have ever had.  We were a little reluctant to make the gravy, it sounded a little odd, but we will be eating this every time we have ham from now on! 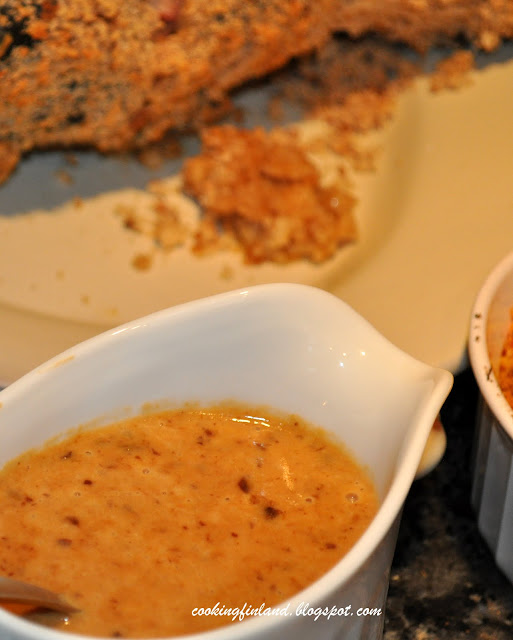 I also made an extremely traditional Finnish potato casserole.  The day before, I cooked and mashed 6 large baking potatoes, making a very dry potato mash.  To this, I added 3 Tablespoons of flour, then I put the dish in my warming drawer overnight.  It is very important to keep the potatoes at about 125 degrees Fahrenheit for an extended time, the starch breaks down due to a reaction with the flour, and the dish becomes naturally sweet.  (If for some reason you can't do this, you could add a couple of tablespoons of brown sugar).  After the potatoes have sweetened, I added 2 1/2 cups of whole milk and a quarter stick of melted butter before placing them in a 350 degree Fahrenheit oven to cook for 2-3 hours until they develop a crust. 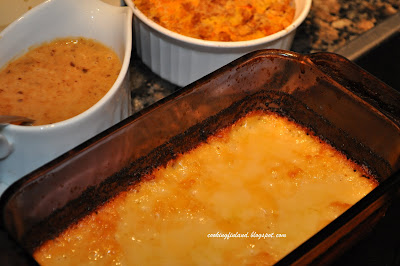 We also enjoyed our rutabaga casserole and carrot casserole which I got out of the freezer from previous posts.  Beet salad rounded out our meal.  We had a condiment and cracker tray, but unfortunately by the time I took this picture, the 2 pounds of pickled herring had all but disappeared!  There still still some winter squash salad, though. 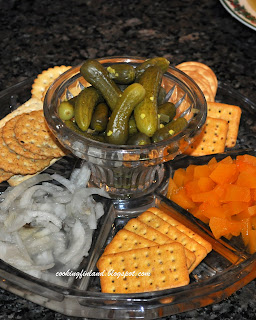 Later in the day we had strawberry fluff, it should have been with lingonberries, but since I didn't have any, we took a vote and strawberries beat cranberries 3-2.  I pureed a package of frozen, sweetened strawberries, then folded in a pint of sour cream.  At serving time, I folded in a couple cups of whipped cream.  We ate this with more prune tarts. 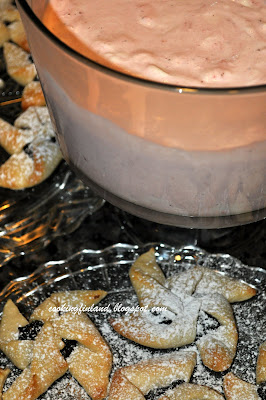 Santa was very good and brought us some delicious Finnish licorice.  The World Market store near us got a big shipment in this year.  Salmiak is a kind of licorice that we don't often find in the U.S., it is very salty and has a strong flavor.  We really enjoyed finding this treat under the tree. 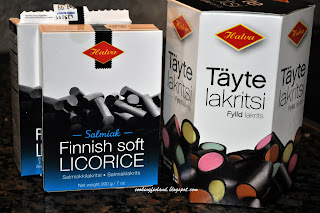 Merry Christmas to everyone, hope you all had as delicious of a holiday as we did!
Posted by Elizabeth at 8:43 AM