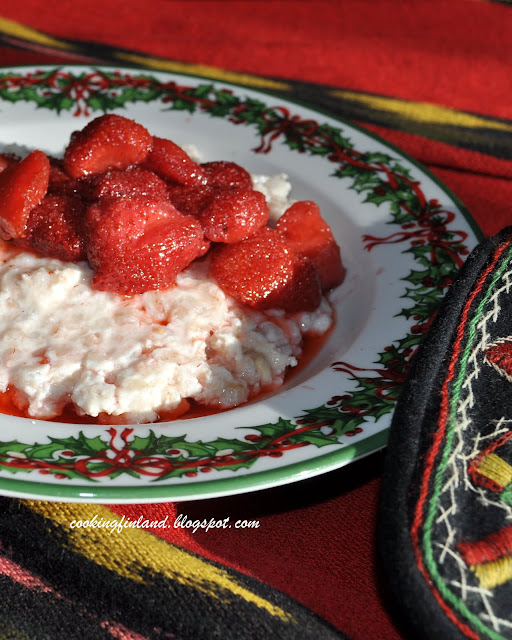 Yesterday I made a wonderful porridge made of Barley.  This is one of my all-time favorite dishes, but I haven't eaten it for 28 years!  When I was an exchange student, I first stayed with a terrific, welcoming family in Ala-Valli Finland.  Their grandmother lived with them, we called her Mummo, grandmother in Finnish.  I learned a lot from Mummo and Mrs. Kiviniemi, even though I didn't speak much Finnish at that time.  They were very patient and taught me to knit (Even though the sweater I made looked like it was shaped for a monkey, not a person!).  They baked rye bread in a traditional stone bread oven where first you warm the oven with fire, then push the fire out and cook the bread in its place.  And they made this delicious porridge of barley.  I stayed 4 months with their family and had a wonderful time, they were an excellent host family and I will always have good memories of my time there.  I really enjoyed having a host sister my own age, she was so nice and welcoming to me.  Little did I know she would grow up to be the prime minister!

For those who think of porridge only as something from fairy tales, porridge is any dish made by boiling grains in milk or broth, for example oatmeal.  This Barley porridge is probably the most time consuming of all, but it is not difficult, I made it yesterday while trying to get all of the other Christmas activities done...I have to admit that I didn't pay very good attention to the recipes and it still turned out to be an incredible dish.

To make the barley porridge, I used a couple of different recipes.  The first is from Beatrice Ojakangas' Finnish Cookbook:

Cook the barley and water slowly for 30 minutes or until the barley begins to expand.  Stir in the milk, bring to a boil, and pour into a casserole.  Dot with butter, add the salt, and bake in a slow oven (250 degrees Fahrenheit) for 4 hours or until the liquid is absorbed.  Stir occasionally as the casserole bakes.  Makes about 6 servings.

I compared this recipe to one I found in Finnish through this link:  Kotiliesi.  This recipe calls for soaking the barley overnight, boiling the grains for about an hour, and baking for three hours.  The ingredient amounts were much larger, this is so delicious, I decided to make a larger batch.  Kotiliesi lists ingredients as:
6 deciliters whole barley = 2 1/4 cups whole barley
6 deciliters water = 2 1/4 cups water
3 liters of whole milk
1-2 teaspoons salt
2 tablespoons of butter

Kotiliesi also includes hiding an almond in the porridge for the lucky person to find...I omitted this yesterday.  We will be putting a hidden almond in our rice porridge for Christmas Eve, though, this is a Finnish tradition.  The one who finds the almond gets good luck all year. 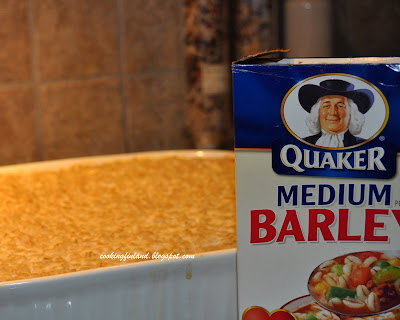 I soaked the barley for several hours, starting in the morning, we don't have a grandmother living with us to get up in the middle of the night to make this for breakfast, so I made it for dinner instead.  Then I decided to boil the barley for 1 hour as in the Finnish recipe, I remember the grains as being extremely soft, almost a hominy-like texture.  Murphy's law then took over, not only did I only have skim milk, I only had a couple of cups of it, and I had soaked an entire box of barley (2 1/4 cups)!  Not having time to run out to the grocery, I used the skim milk that I had, added some cream to it, and finished up the rest of the liquid with powdered milk and water.  Somewhere in all this, I lost track of the amount of liquid I actually used.  I sprayed a couple of large casserole dishes with cooking spray and put them in the oven at 250 degrees Fahrenheit, uncovered.  I stirred them about once an hour, and cooked them all afternoon.  After about 3 hours, the liquid had evaporated enough so I combined them into one casserole dish.  We were not ready to eat after 4 hours, so I left it in the oven.  We finally were ready to take a break and eat after 5 hours of baking.  It is a very creamy dish, and develops a slight crust on top when it is done.


I served the porridge with sugar, cinnamon sugar, and some strawberries out of the freezer.  It was incredible, everyone loved it, even the little boy who had been sneaking Christmas cookies all afternoon .  My husband, who in general does not care for porridge as an evening meal, ate two big bowls and said, "This is the best RICE pudding I've ever eaten."  ;D  I don't think too many Finnish families make this because it takes so long to make--Beatrice Ojakangas says that it is traditional in Satakunta which is in western Finland.  I am certainly glad that the Kiviniemi family served this to me, I will be making it again often, and next time I will pay more attention to the exact liquid amounts that I use!  I might try making this in a slow cooker, but then the liquid amounts would definitely have to be adjusted. 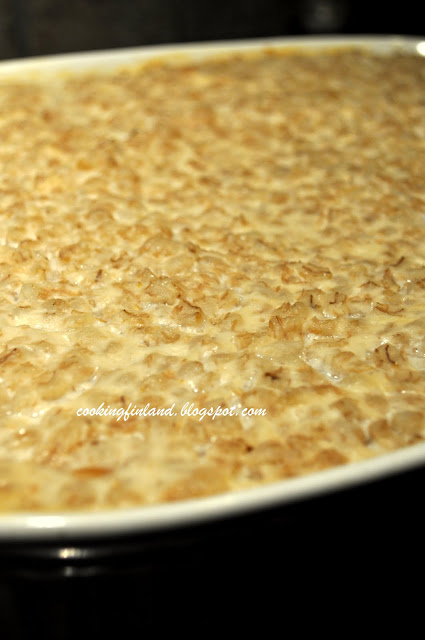 I would love to get comments on how others make this porridge!   I know that some of my readers disagree on political matters, please remember that this is a cooking blog, and I have only good things to say about both of my host families.

Happy Baking!
Posted by Elizabeth at 8:14 AM