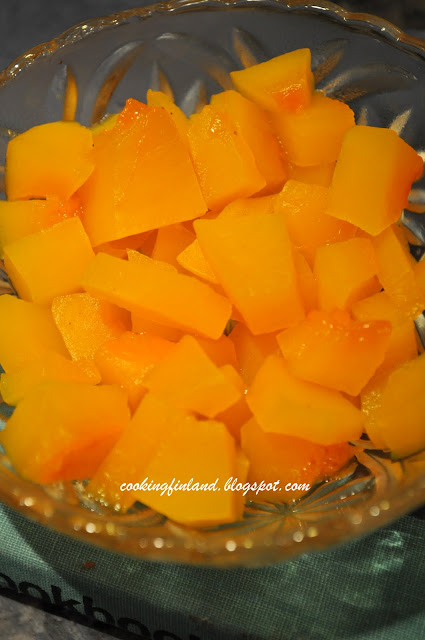 Our next cooking project is called winter squash salad, but may more accurately be described as a relish.  It reminds me of Japanese pickles, but not salty.

I looked at recipes from the Finnish Cookbook, and Helsingin Sanomat, among others.  All seem to agree that the spices include whole cloves, but some add whole nutmeg, whole chunks of ginger, and one even added cinnamon sticks.  I decided to use the whole cloves that I had in the cabinet, along with a chunk of candied ginger (there is already so much sugar in the recipe that it didn't matter that the ginger was candied.)

First we peeled and removed the seeds from a butternut squash. After dicing, the small squash yielded about 2.5 cups.

We put the squash cubes in a pot with 1 cup sugar, 1 cup white vinegar and 1 cup water.  (250 dl of each).  To this we added three cloves, a chunk of ginger (candied was all I had), and since I didn't have a piece of nutmeg, I sprinkled in a little ground nutmeg. 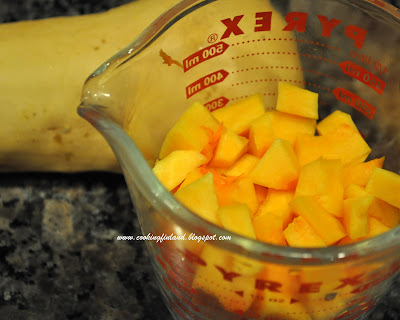 This simmered for about half an hour, the squash shouldn't get too soft or it will fall apart.  The kids complained about the vinegar smell! 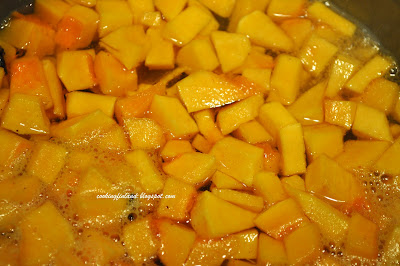 When the squash was a little soft, I poured it into a container to keep and removed the whole spices.  This will go really well with meat and potato dishes, but we will save it for later in the refrigerator.  The kids tasted it, and approved.  My daughter said, "I really didn't think I would like it, but it is good."
Posted by Elizabeth at 9:30 PM