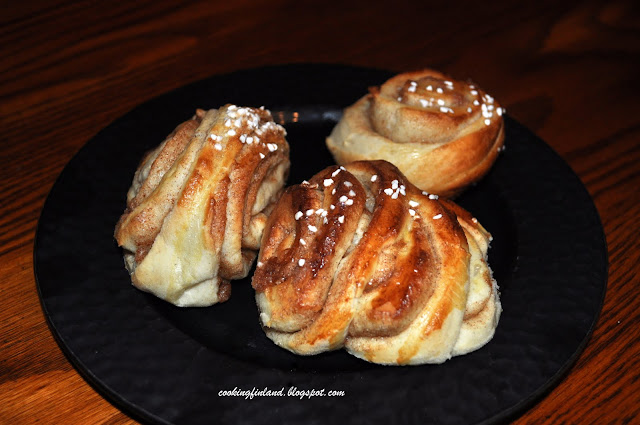 Yesterday I made Finnish cinnamon buns, they are very good with coffee.  They are not as sweet and gooey as their American counterparts, and they have a light cardamon flavor.

These are the ingredients to make 40 buns:

Topping:
1/2 of a beaten egg to brush on before baking
pearl sugar


First, I melted the butter and put it into my stand mixer bowl.  Then I heated the milk in the microwave until it was lukewarm.  Then I sprinkled the yeast on top.  The salt, sugar, cardamon and egg were also mixed in well.

Next, the flour was added a little at a time.  This is what the dough looked like after I had added 3 cups of flour, mixing after each addition: 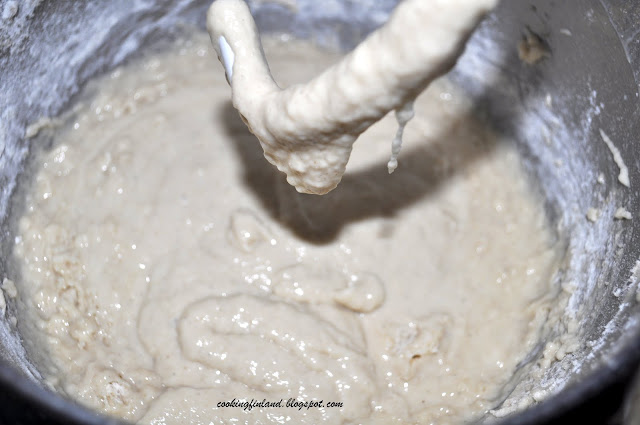 After 4 cups of flour and scraped down the edge of the bowl with a spatula, it looked like this: 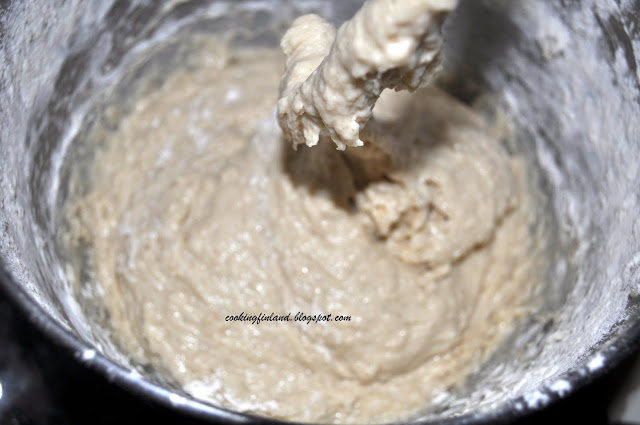 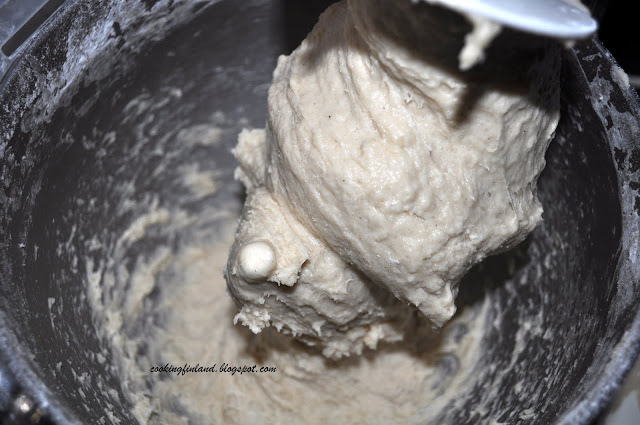 The dough pulled away from the sides at 5 1/2 cups, I let it knead in the machine a little longer, but didn't add any more flour.  The dough has an incredible feeling, it is warm and soft, don't add too much flour or it will get too stiff and won't rise as well. 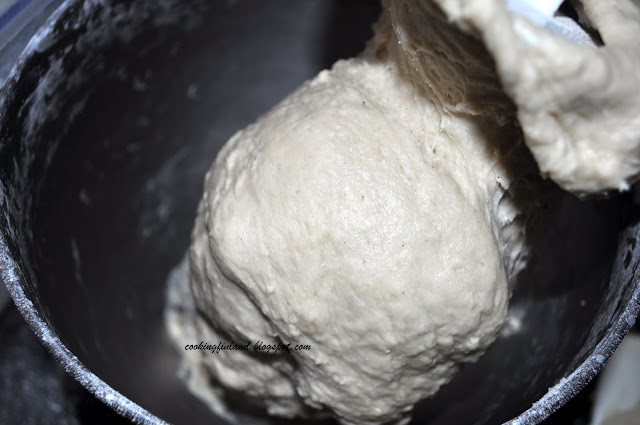 I moved the dough to a lightly greased, non-metal bowl to rise.  Never leave the dough to rise in a metal bowl, it just doesn't work as well.  A sprinkle of flour on top, and I covered it and put it in a warm place.  I used my warming drawer on the proof setting, but it also works well to turn the oven on as low as possible, let it heat up, then turn it off and put the bowl of dough in.  Or find a heating register in a place where it won't be disturbed.  At our house, it would be difficult to find somewhere it would be safe! 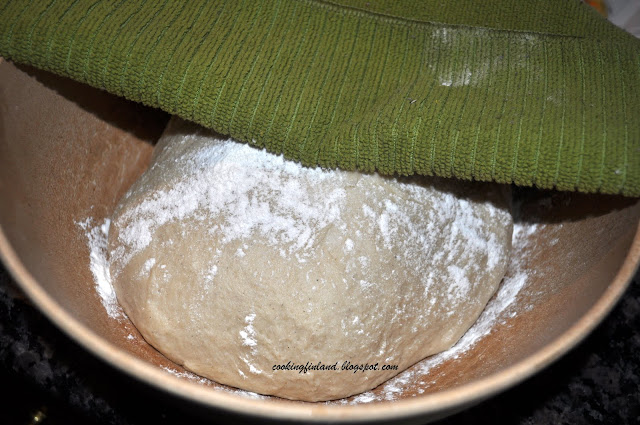 It was supposed to rise for about 40 minutes, but we were busy rewiring the internet cable in our house, and it rose a little longer!  Look how big it got: 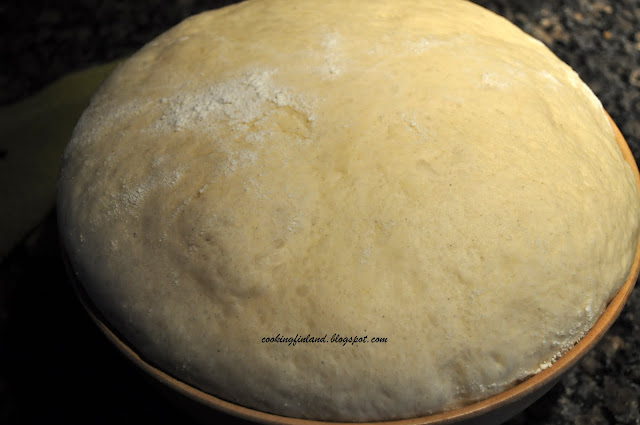 I punched it down, it was still warm and soft, very relaxing to work with. 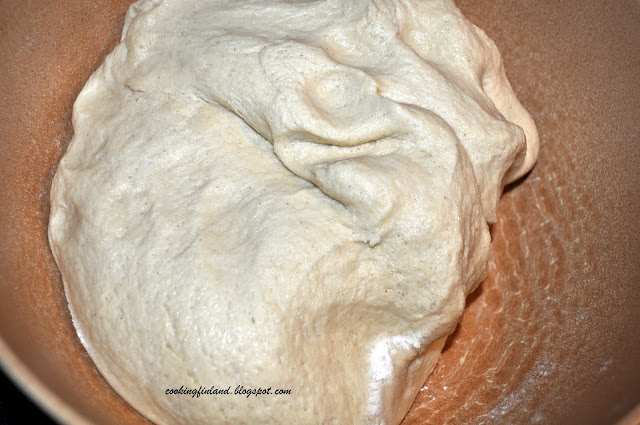 After dumping the rest of the flour (1/2 cup) onto the clean counter, I cut the dough in half and rolled each half out into a large rectangle, about 14x28 inches (or 20x40 cm). 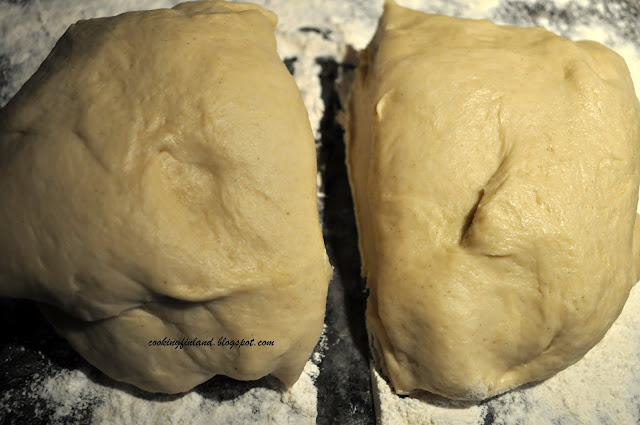 To make the filling, I melted the butter and added the sugar and cinnamon.  If the butter had been well-softened, I wouldn't have melted it, but I forgot to lay it out earlier.  It doesn't seem to matter much if you melt the butter, but if it is too hard, the filling won't spread well. 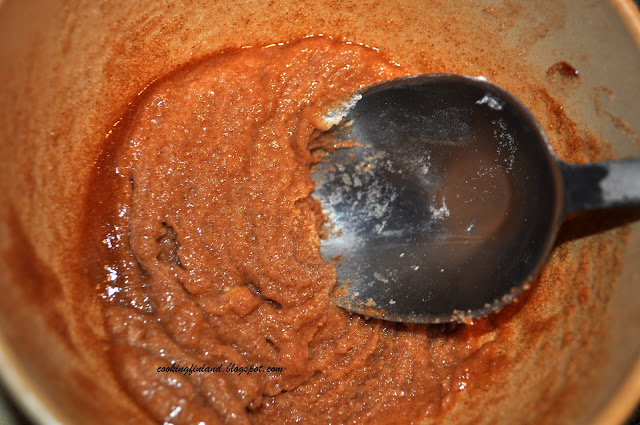 After spreading the filling on the rectangles, I rolled them up along the long side (making a long, thin roll). 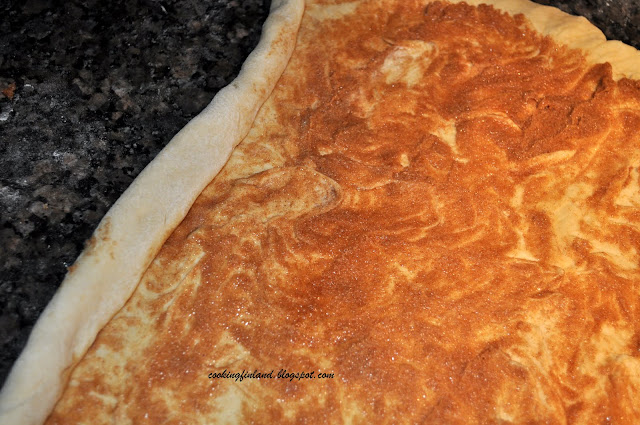 There are different options cutting them, the first I did was what is called korvapuustit in Finnish.  Cut the rolled dough on an angle, making every other angle the opposite direction: 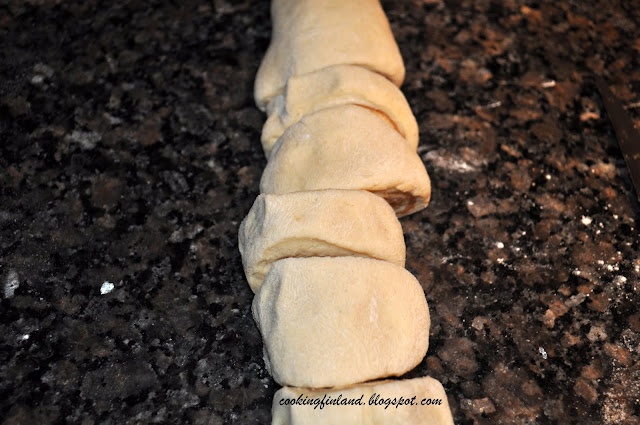 Half of the buns will be right-side up, and the other half will need to be turned over so that the narrow edge is at the top.  Take a knife and smash in the top like this: 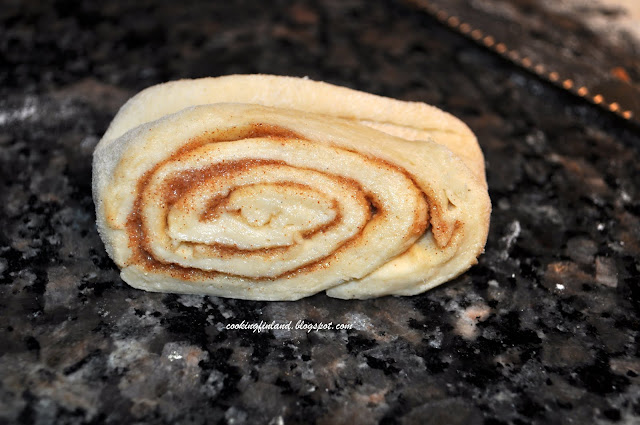 Another shape can be made by cutting the dough straight, then cutting two slits in the dough which don't go all the way through. 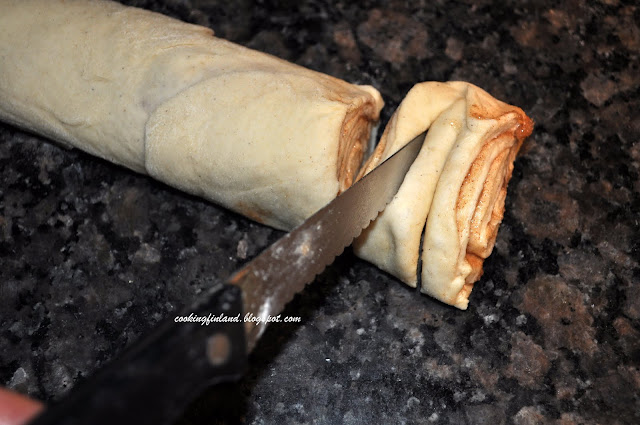 Open the attached pieces slightly, and lay them on their side, and you get kind of a bear claw shape like this: 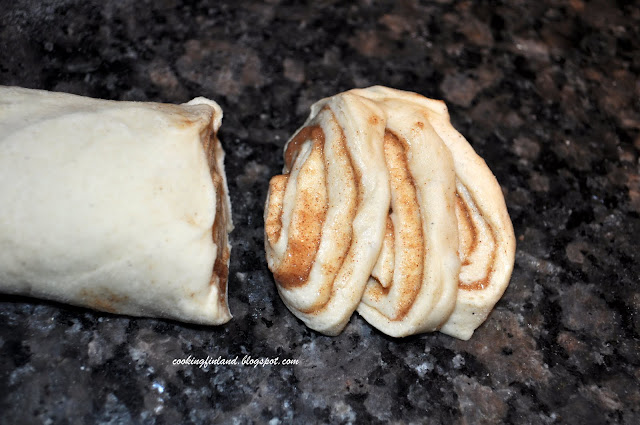 You can also just cut the dough straight and lay the pieces on their sides.  I used a very sharp serrated steak knife to cut, it worked well.

Move all of the buns to a cookie sheet that has been prepared with parchment (or you could grease it).  Cover them again and let them rise about 20-30 minutes until they double in size.  This dough rises so well, I'm not sure that it took even 20 minutes!

Brush the buns with beaten egg and sprinkle with pearl sugar.  Bake for about 8-10 minutes, watch them carefully!  Theoretically, they should cool under a clean dishcloth.  I don't think my family has ever let these get completely cool, they are incredible straight from the oven! 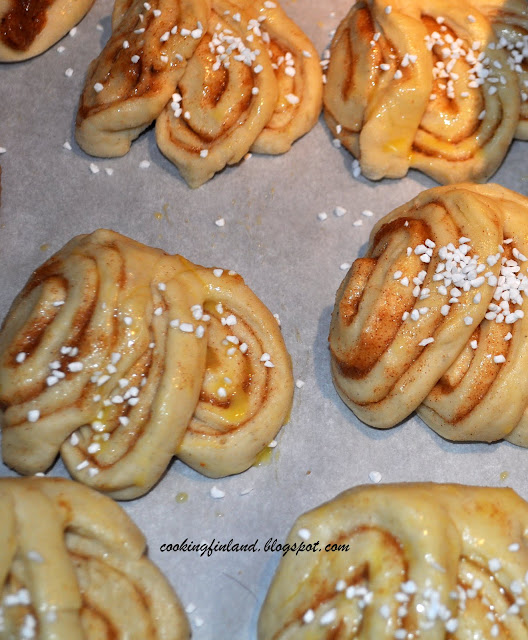 But if you are able to make a few extra, these keep for about 3-4 days.  Or make extra and freeze them to have on hand when guests come for coffee, as is very popular in Finland.  My kids have already learned that "coffee" in Finland means that there will be plenty of good treats to eat!
Posted by Elizabeth at 8:58 AM