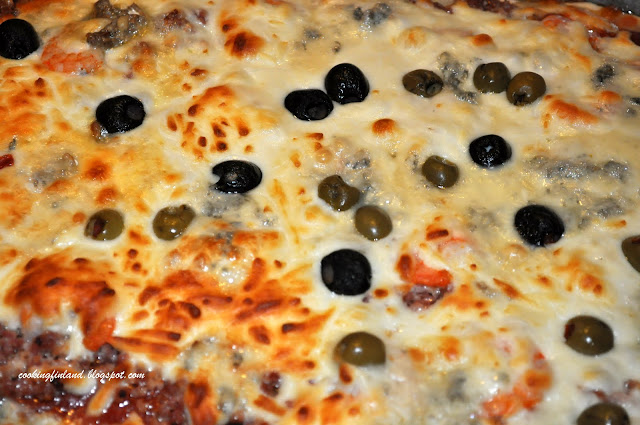 This may sound like an odd combination, but it is one that my husband and I ordered many times from my apartment in Helsinki years ago.  I don't know if it is particularly Finnish or not, but it is a great reminder of simpler times for us.  Finnish pizza in general is thin crust, and seafood toppings are not unusual.  One very popular pizza is Frutti di Mare, which has tuna, shrimp, and oysters.  This may sound a little strange for Americans, but it is really delicious.  Shrimp is a pretty common pizza topping in Finland.


When we ordered this pizza in Helsinki, we actually ordered it with mushrooms, not olives.  Unfortunately, the mushrooms I bought for tonight ended up as a second portion of mushroom salad!  So tonight I substituted olives, we had a mixture of green and black olives leftover in the refrigerator.


I like to make my own pizza dough, it is so easy.  First I microwave 2 cups (5 dl) of water for one minute, it shouldn't be hot at all, otherwise it will kill the yeast.  I put this in my stand mixer with the dough hook, and add about 1 packet of dry yeast (I buy yeast in bulk, so I usually just put a little in...) and a dash of salt.  Next, add flour (bread flour if you have it) one cup at a time with the mixer on low until the dough forms a ball and pulls away from the sides of the bowl.  I think this took about 5 cups today...it varies with the conditions in the kitchen.  It shouldn't be too stiff, but it will look like this: 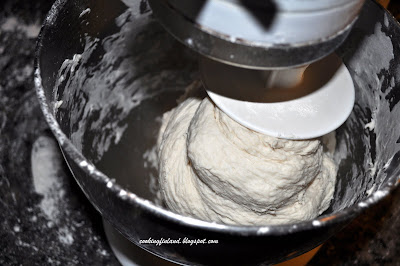 Let it knead in the machine for a few minutes, then put it in a lightly oiled plastic, glass or wooden bowl to rise.  Don't leave it in the metal bowl from the mixer, bread dough doesn't rise as well in metal--it conducts heat too well.  Cover with a clean cloth and put in a warm place for up to an hour.  Today I only let it rise for half an hour, because we were in a hurry.  Thin crust pizza doesn't seem to require as long of a rise as bread dough. 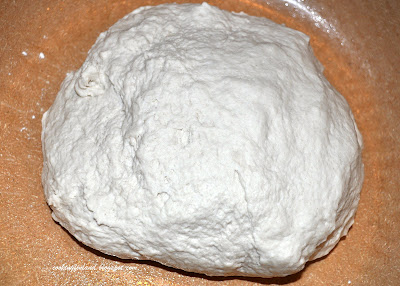 While the dough was rising, I got some leftover ham chunks out of the freezer and thawed them slightly in the microwave.  The stand mixer grinder attachment grinds meat better if the meat is partially frozen.  The ham on the pizza we ordered in Helsinki was ground like this. 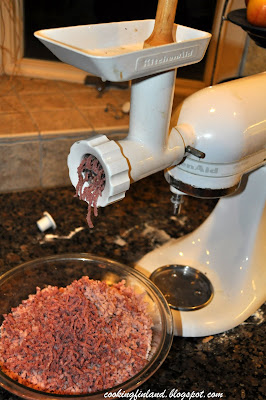 Next, the dough was ready to form.  I just patted it out into the oiled jelly roll pans, this amount makes two large pizzas.  My technique is to put the crusts in a cold oven, set it for 400 Fahrenheit (200 Celsius) and let the crusts rise just a bit as the oven heats up.  This also lets them cook just a little and reduces the overall cooking time.
If we are not in the mood for pizza, sometimes we sprinkle on some rosemary and salt (or Parmesan cheese) and fully cook the dough at this point for delicious foccaccia bread. 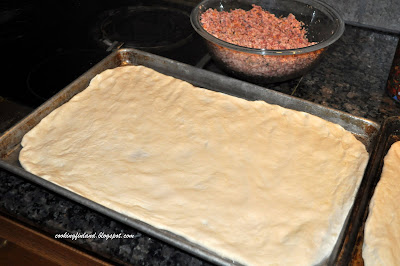 Next, I put on some canned marinara sauce.  My kids are really particular about spaghetti/pizza sauce, and I used the one they eat the best.  You might call this "picking your battles..."  Then I sprinkled on the ham liberally, and covered the pizza with precooked peeled frozen shrimp (still frozen, not thawed, otherwise they would overcook). 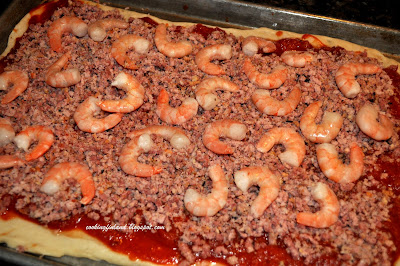 Then I coated the pizza with mozzarella and dotted on the blue cheese.  This was the last of an excellent blue cheese that our neighbor Anna brought to the New Years eve party.  A smattering of olives, and the pizzas went back in the oven.  I rotated them from the top to lower rack, and cooked them for about 25 minutes. 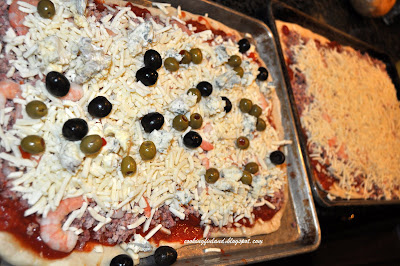 The pizzas were a big hit, even our youngest had two big slices.  No one complained about the unusual toppings, and I am really looking forward to leftovers for lunch tomorrow!
Posted by Elizabeth at 7:56 PM