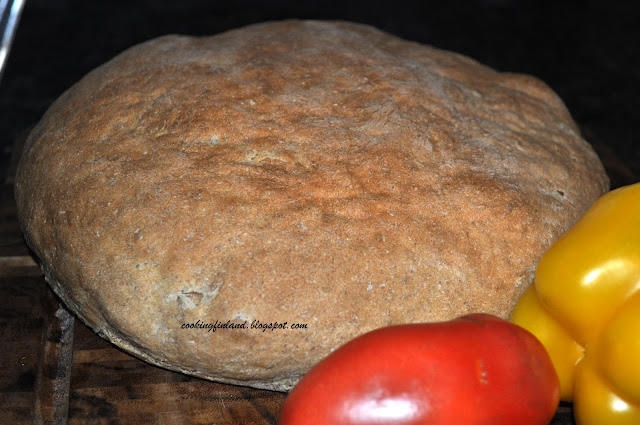 In Finland, rye flour is used in so many delicious recipes, including lots of different types of bread.  The bread I made today gets its sweetness from the malting process, converting starch into sugar, imellyttäminen in Finnish.  Before sugar was commonly available, this was the only way to sweeten foods in the winter in Finland, so a lot of holiday dishes like the potato casserole at Christmas use this process.  You can find my blog on the potato casserole here.  At Easter, we will be making mämmi, a very traditional rye malted porridge.
To malt the dark rye flour for the bread, I put 3 dl (1 1/2 cups) of dark rye flour in a bowl and poured 4 dl (2 cups) of almost boiling water over it.  This was covered and allowed to sit in a fairly warm spot at least overnight. 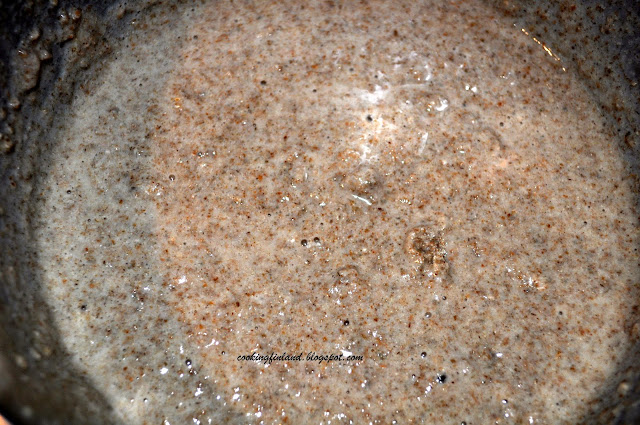 Today, I added two packages (4 1/2 teaspoons) of dry yeast to the bowl, along with 4 dl (2 cups) of lukewarm water, 3 teaspoons of salt and 2 teaspoons of sugar. 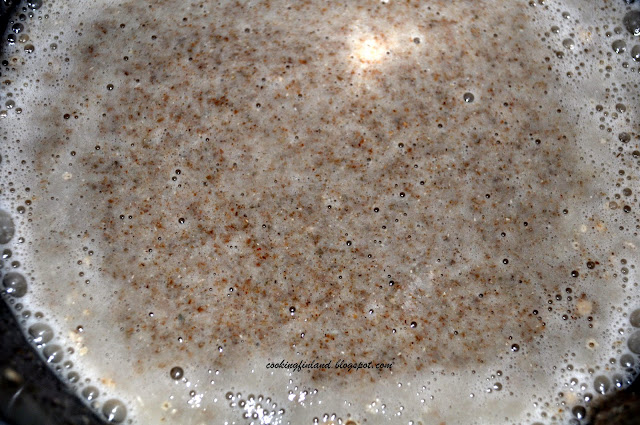 After stirring this well, I used the stand mixer to beat in about 8 cups (2 liters) of bread flour (all-purpose flour could be substituted if you need to, but bread flour rises better).  Add the flour a little at a time.  After 6 cups it looked like this: 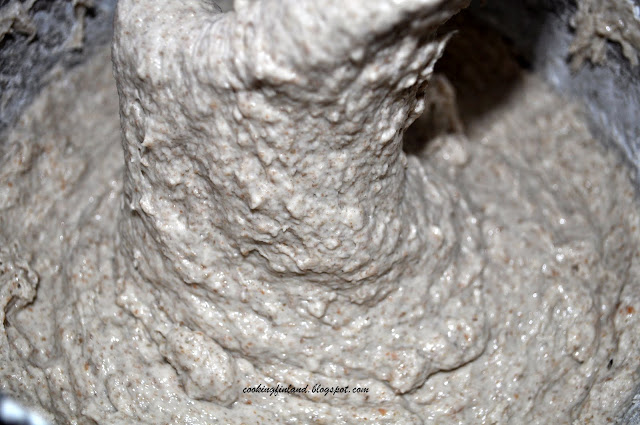 Adding the full 8 cups made a very sticky dough that pulled away from the sides of the bowl. 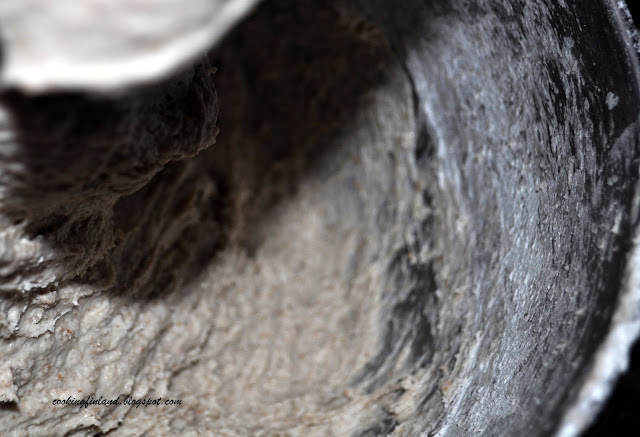 It was so sticky that I sprinkled more flour on it to get it out of the mixing bowl: 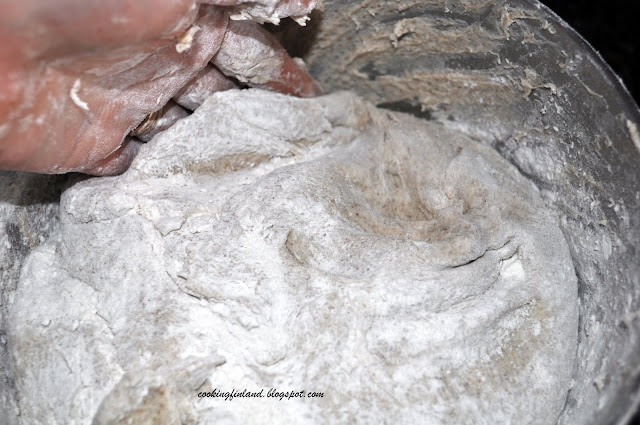 I used my largest bowl, greased, to put the dough in to rise.  After sprinkling a little flour on top, I covered it and left it in a warm place for about an hour. 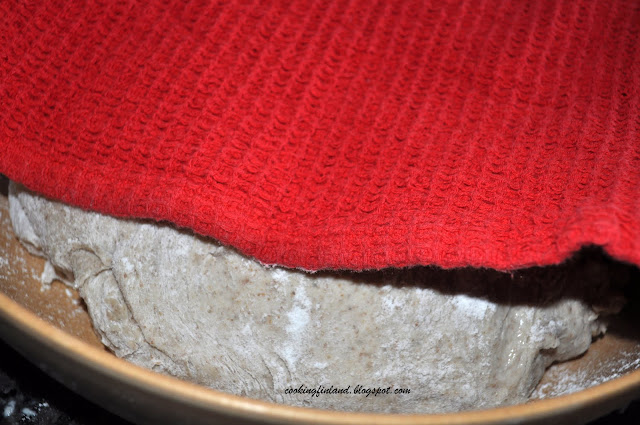 I've debated for a while about whether I need a bigger stand mixer, I've had mine a long time.  This dough was almost too much for the one I have, maybe next time I will divide the malted rye flour into two parts before adding the other ingredients.  I have the white mixer below, but if it quits, I will probably pay extra for one of the larger ones, I use it so much!

After about an hour, the dough had at least doubled in size.  This dough gets more tasty the longer it rises. 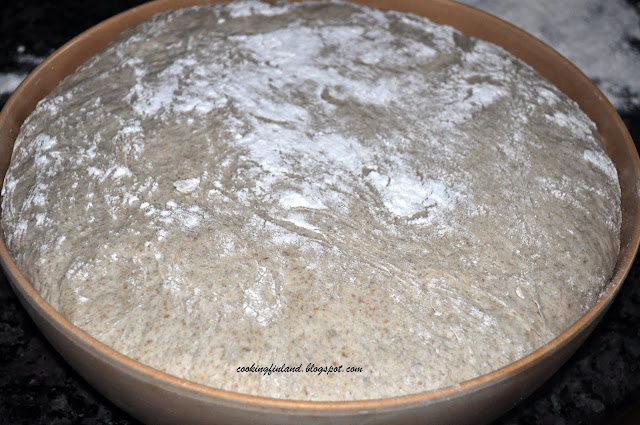 After punching down the dough, I turned it out on the floured counter and cut it in half and shaped each into a round loaf.  I placed each of these on cookie sheets lined with parchment and covered them with dishtowels.  This time they rose to double in a little over half an hour. 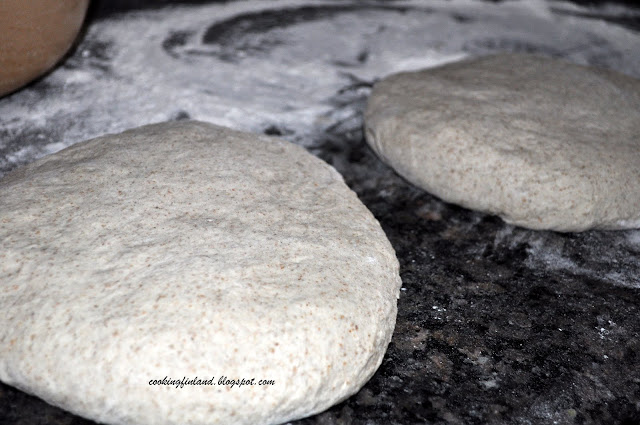 I baked the loaves in a 325 degree Fahrenheit oven.  I had a timing problem, had to leave in the middle of baking, so I put the loaves in a cold oven, set it for 325 F for 50 minutes, and left.  I came back about one hour and 45 minutes later, and the loaves were perfect!

The instructions in Parhaat Leivonnaiset say to bake the loaves in the bottom half of a 175 degree Celsius (350 degrees Fahrenheit) oven for 50-60 minutes.  You can tell when the bread is done by the hollow sound it makes when thumped. 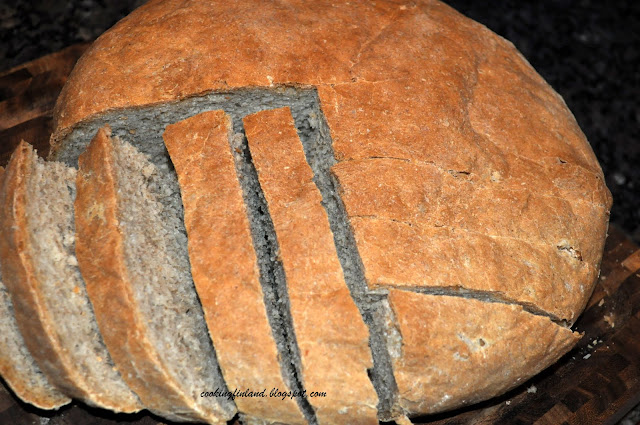 After the loaves had cooled for about 45 minutes, the kids couldn't wait any longer!  We cut thick slices and made sandwiches with butter, ham, salami, sliced sweet peppers, mushroom salad, and marinated cucumber and onion slices. 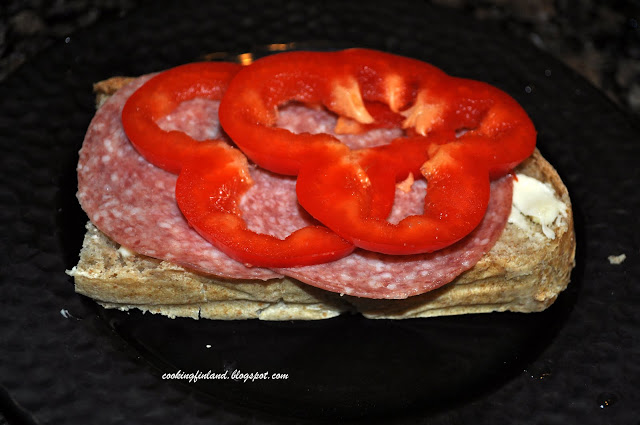 This bread had a wonderful flavor and texture.  When I think of American rye bread, I think of caraway seeds and Ruben sandwiches, but this is not that kind of bread.  It is much more versatile and milder, with sweet undertones.  And it is mostly gone...half of one loaf might make it until breakfast time, unless we have a teenager needing a midnight snack!
Posted by Elizabeth at 6:54 PM