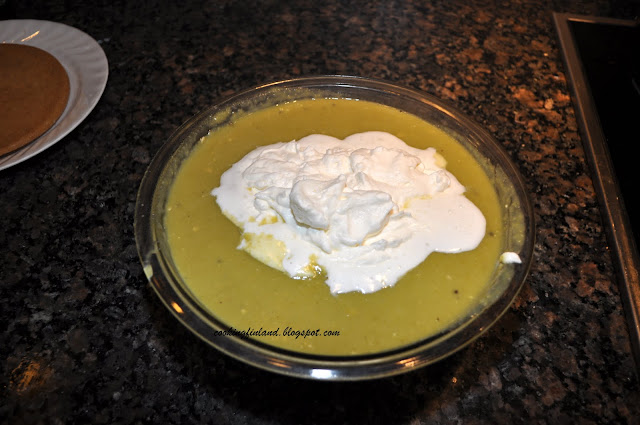 Last night we had pea soup for dinner.  The entire country in Finland eats pea soup for lunch on Thursdays, followed by oven pancake with strawberry jam for dessert.  My husband claims that the strawberry jam is the reward for enduring the pea soup!  Every cafeteria in the country serves the same meal.
I need to start this blog with a little family background, my husband hates soup.  Except American chili, which some people wouldn't even refer to as soup.  Especially pea soup.  The kids love soup of all kinds.  So I didn't tell my husband about the special surprise I was making for dinner...and I made sure to make his favorite kind of bread to eat with ham, in case he couldn't eat the soup at all.  You can find that recipe here.
Now a little recipe background.  Usually when I make pea soup, I wash the split peas, pour them in the slow cooker, add a ham bone and maybe some chopped onion, add about eight cups of water, and let it simmer on low heat all day.  The soup in Finland is usually made in about the same way (usually on the stovetop instead of in the slow cooker), sometimes with chunks of carrots or other root vegetables.  Easy and delicious.  But my husband hates it.
Today, I tried Beatrice Ojakangas' recipe (from The Finnish Cookbook), she calls it hernerakkaa.  I can't find any references to this soup in Finnish (using Google Finland), the only references I find to it are her own recipe and the Moosewood cookbook. It is possible that this is an American Finnish recipe.  I would love comments about this dish and its authenticity.  No matter whether it is authentic, this recipe was easy and delicious, and I will be making it again soon!
I started with a 16 oz bag of green split peas, this is about 2 cups.  I washed them to remove any hulls or dirt. 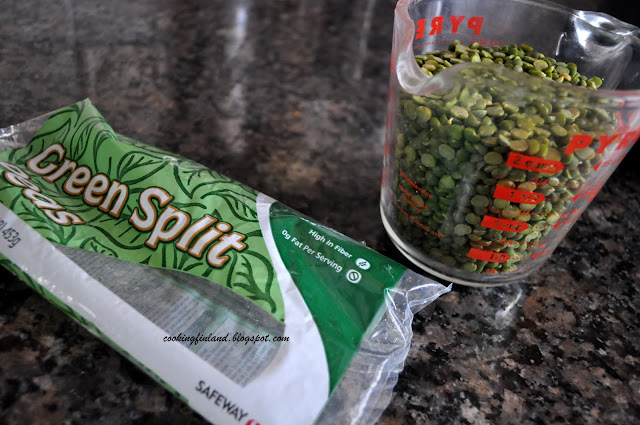 The recipe calls for soaking them overnight, I didn't think ahead, so these only got to soak for about three hours.  Then I boiled them in 12 cups of water for about an hour.  Pay closer attention to the boiling than I did--I ended up with water boiling over everywhere!  I added back about the volume of water that boiled out.  Next time, I might use my slow cooker for this part, and cook them on high for about 3-4 hours. 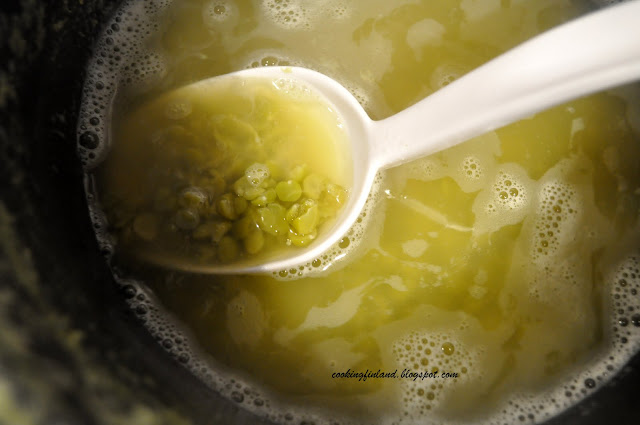 After the peas are soft, I put them in the blender in batches, and blended until they were smooth.  The recipe says that you can also use a wire strainer to push the peas through to make a smooth mixture.  Don't overfill the blender with the hot soup or it will leak out while processing.  I only filled it about half-way full and did three batches.  I carefully took the lid off for this photo, but make sure and use a lid! 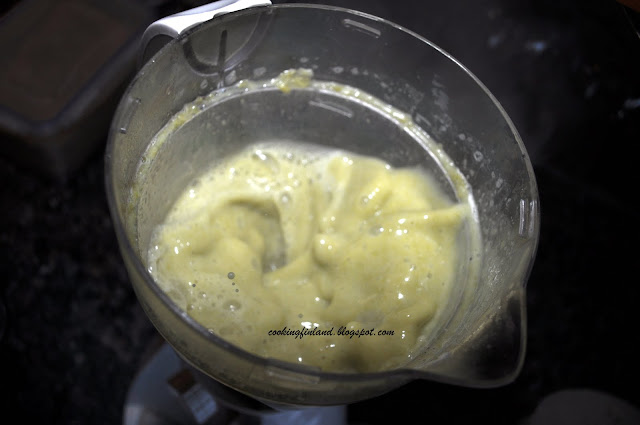 Next, melt three tablespoons of butter in the pot.  (I didn't bother cleaning it, it didn't seem to matter).  Stir in 1 tablespoon of flour to make a smooth mixture.  Pour the peas back in, and cook over medium heat stirring constantly for about 10 minutes. 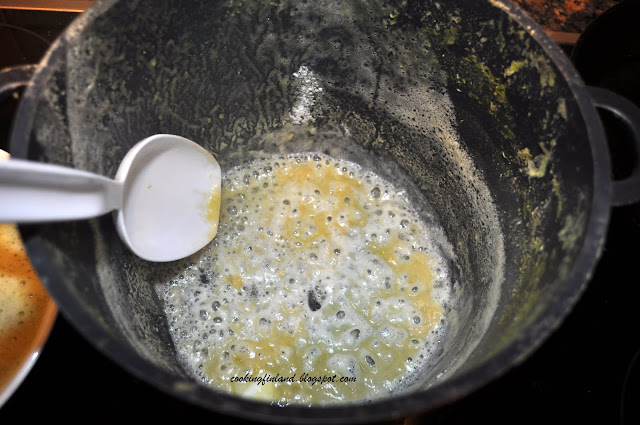 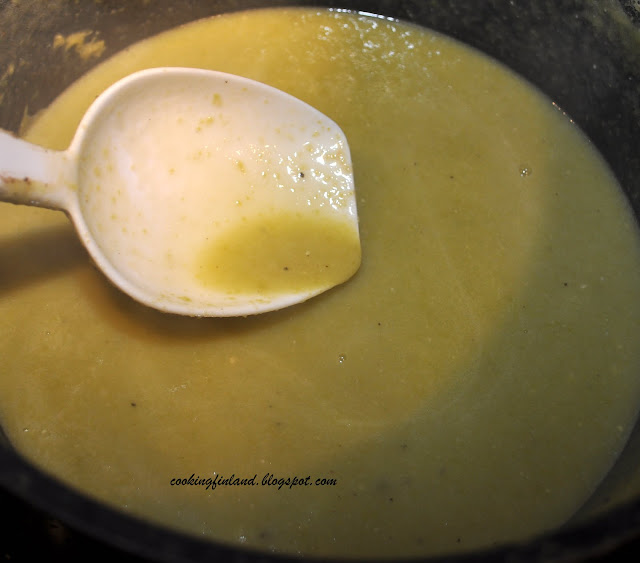 Just before serving, the recipe calls for adding 1 cup of whipped whipping cream.  I just couldn't do it, it just seemed like too much fat to me.  Instead, I added 1 cup skim milk to the soup, and put 1/2 cup whipping cream on top.  We stirred it up just before serving, the kids liked the way the whipped cream floated on top even after stirring.  Wouldn't it be fun to make flower patterns in the cream like they sometimes do on Lattes?! 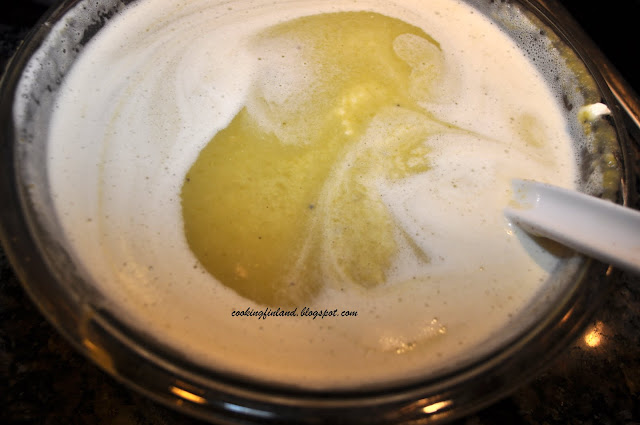 The biggest surprise of the evening came when my husband tried the soup, he actually ate a second bowl!  He wondered where "all the little chunks" went, and wanted to know the recipe.  Everyone agreed that it was delicious.  And the fresh baked bread that we ate with it was excellent, too. 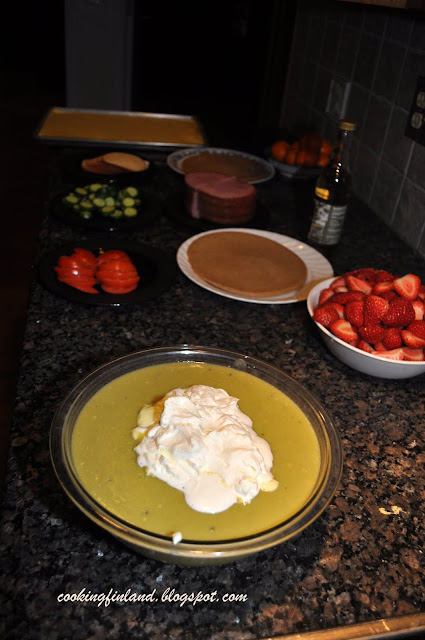 Don't forget the special dessert to go with the pea soup, the oven pancake recipe can be found here.  These ripe California strawberries were such a rare find in the middle of such a cold week! 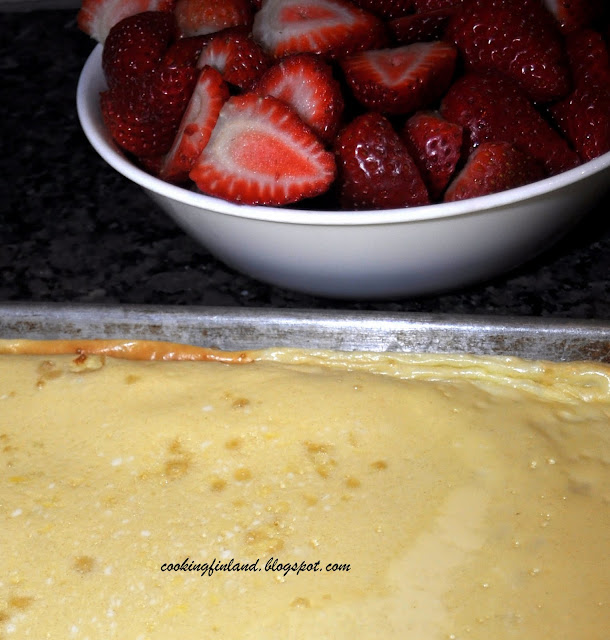 Posted by Elizabeth at 8:36 AM

Email ThisBlogThis!Share to TwitterShare to FacebookShare to Pinterest
Labels: soup