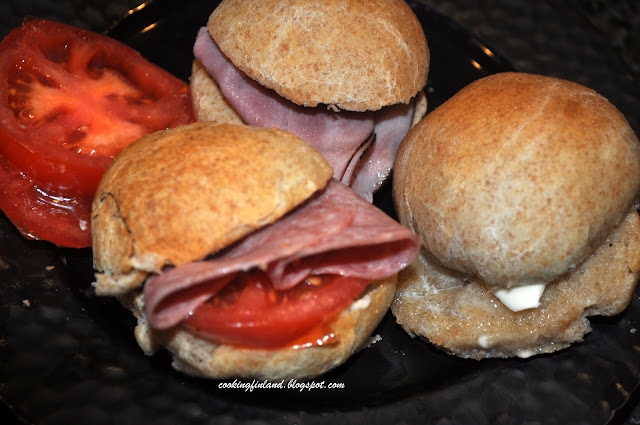 Today I'm writing about some graham rolls that I made for dinner, day before yesterday.  This post should have been published yesterday, but mother nature got in the way.  We had 60 F temperature outside, and our two feet of snow on the ground began melting rapidly.  In this area, it is common for water to drain into a pit in the basement, where sump pumps eject it.  We have a sump pump and a second battery operated one in the same pit.  Small pieces of gravel got in both of them yesterday, clogging them, and in just a short while, the basement was covered in water.  I've spent most of the time since cleaning it up!

I really wanted to bake rye bread, the kind that has to sit overnight, but didn't have any rye flour in the cupboard, but while looking I found graham flour.  Graham flour is a wheat flour, where the germ and bran are coarsely ground separately from the rest.  It has a much different texture than regular whole wheat flour.  I based my recipe on one from a Finnish cooking site that I found here. 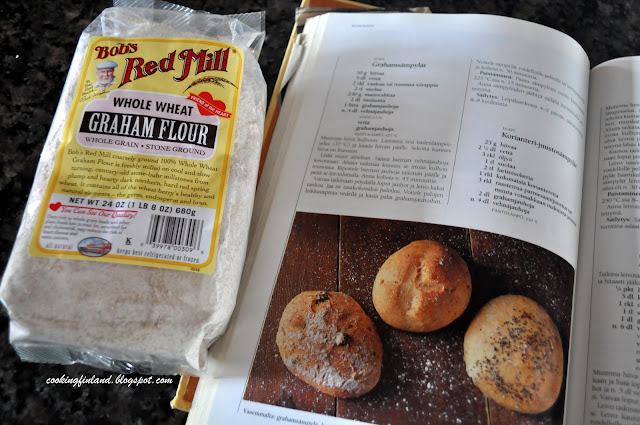 First, I heated 2 cups of water for one minute in the microwave.  You want to use warm water so that the dough rises better, but never use hot water in a yeast dough, it will kill the yeast and the bread won't rise at all. 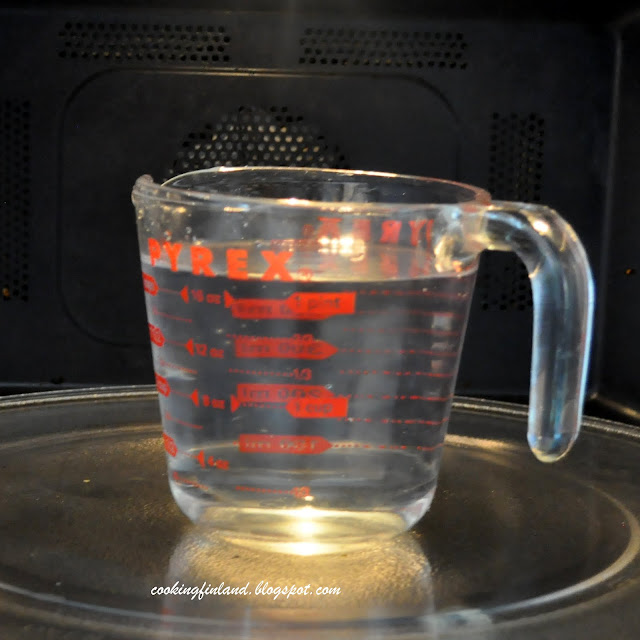 Add 2 packets of yeast, or about 4 1/2 teaspoons of yeast to the water.  To this, add 2 1/2 cups of graham flour, 2 teaspoons of salt, and 7 tablespoons of melted butter.  I used a stand mixer with a dough hook to mix this well. 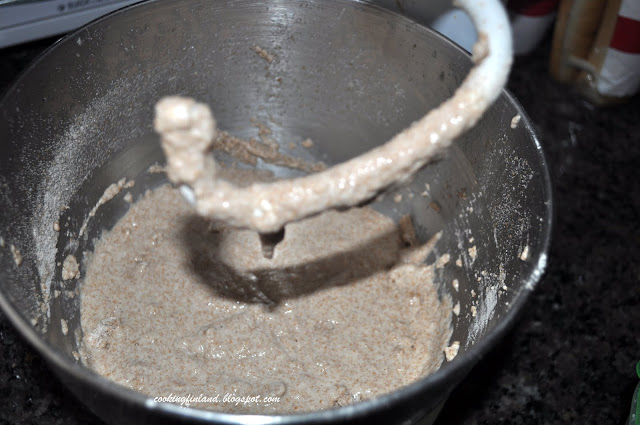 Next, add white flour until the dough pulls away from the sides, probably between 2 1/2 and 3 cups, depending on conditions in the kitchen.  Add the flour slowly so that you can stop when the dough forms into a ball. 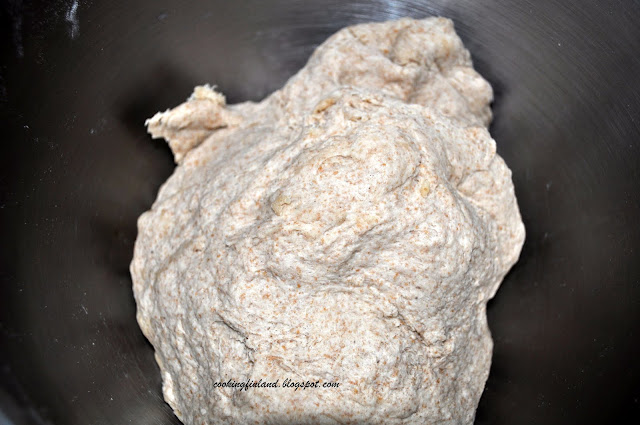 Next, the dough has to rise.  Dough doesn't rise well in a metal bowl, metal conducts heat too well.  I moved the dough to a composite bowl, glass, plastic, or wood also work well.  The bowl was lightly greased first, and I sprinkled flour (maybe a bit much in this photo!) on top so the dough wouldn't stick to the towel covering it.  I put the dough in a warming drawer on "proof setting."  It also works well to put it by a heating vent (but not when you have dogs like ours!) or turn the oven on as low as possible for a few minutes, then turn it off and put the dough in to rise with the door shut.  The dough should double in size in about an hour. 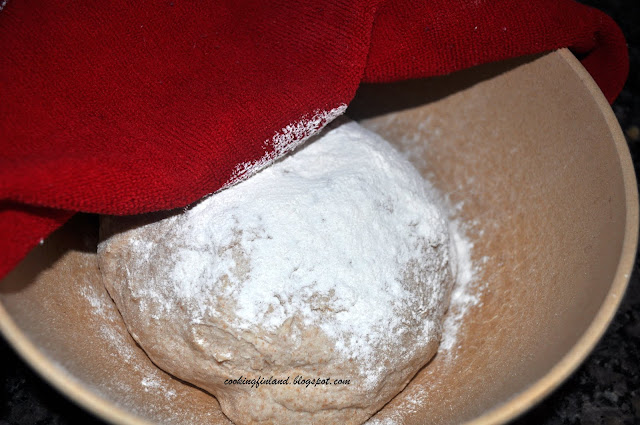 After the dough rises, take it out and punch it down, then cut it in equal portions.  This time I made the dough into small rolls by cutting it in half, then cutting that piece in half again, and repeating this until I had 32 pieces. 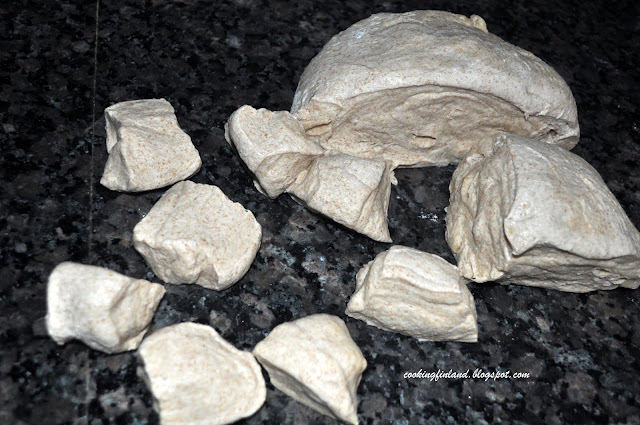 To make a smooth top on each roll, I flattened each piece, then pinched the edges to the back, leaving the top very smooth. 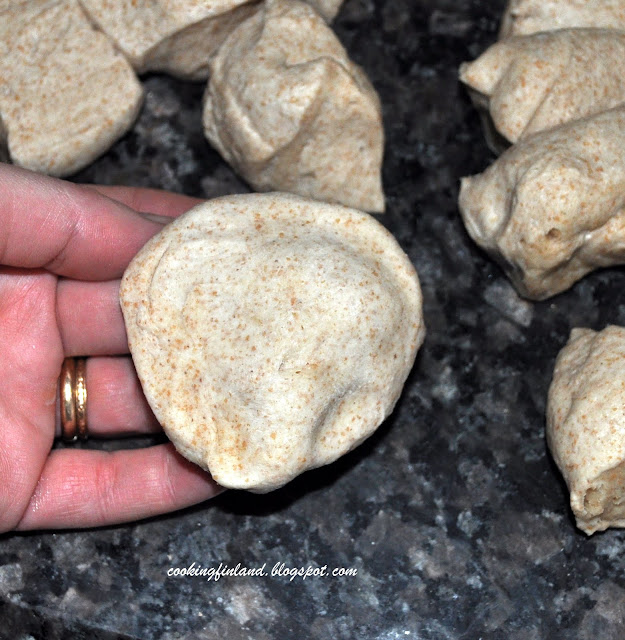 This shows the bottom of the roll.  When I turned it over, the piece was very smooth. 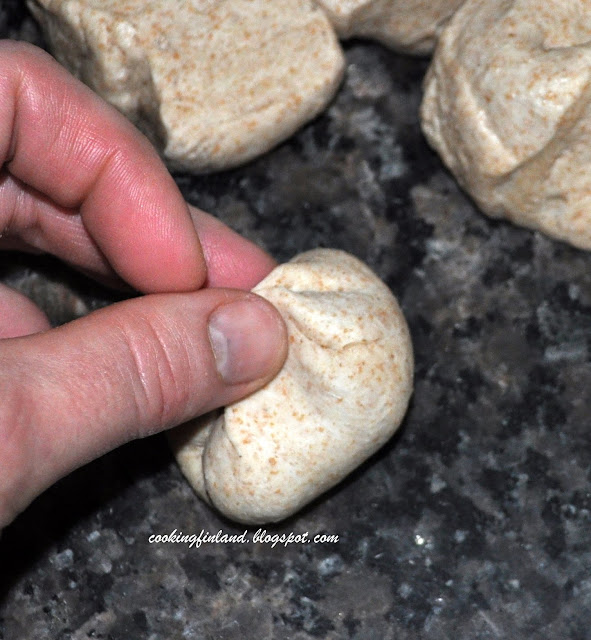 I covered the rolls with a cloth and let them rise for about 20 more minutes. 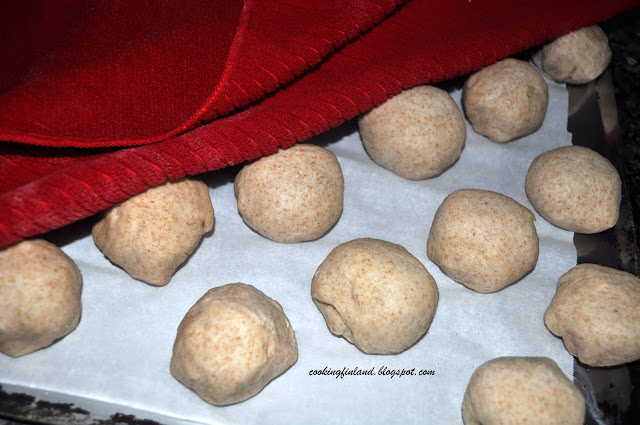 Then I brushed them with milk and baked them at 400 degrees for about 20 minutes.  They were delicious with butter or as small sandwiches with ham, salami and tomato.  There is nothing better than fresh bread! 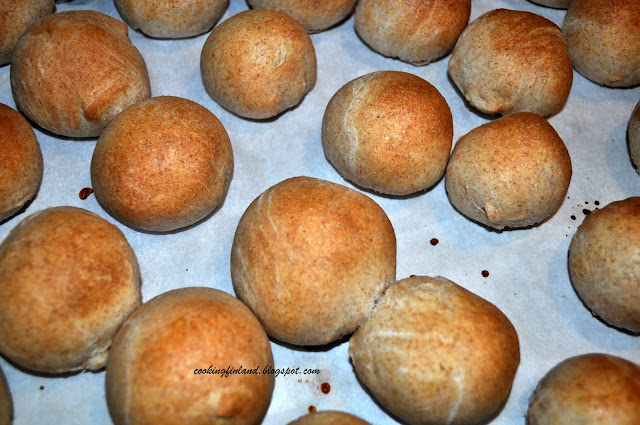 Posted by Elizabeth at 1:16 PM