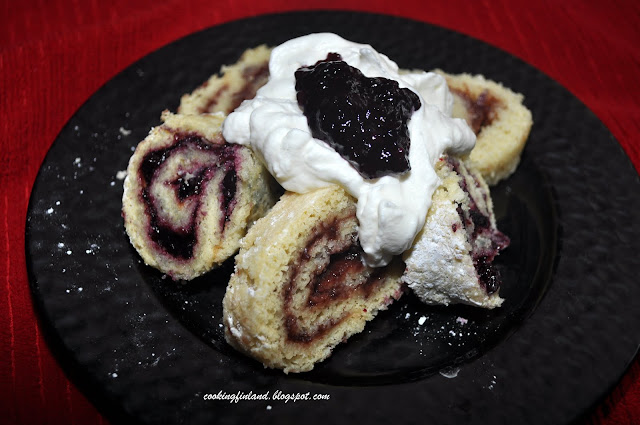 What better way to celebrate Valentine's day than with husband's favorite dessert, jelly rolls.  They are so easy and delicious, it was a perfect day to compare recipes and pull the best features from each.
These are very popular in my husband's family, and so quick to make.
While the ingredients in the recipes that I have from Finland and from the U.S. are very similar, the preparation is different, and this has a huge effect on the final product.  The Finnish cookbooks and internet recipes that I have seen beat whole eggs until they are creamy.  The Better Homes and Garden (BHG) recipe separates the yolks from the whites and beats each separately.  The texture and the ease of rolling up the cake are MUCH better with the BHG recipe!
Cooking yesterday was a bit of a disaster...I was pressed for time because of the kids' valentine parties and generally driving them around from the places they were to the places they needed to be next.  I decided to make two recipes, one from Parhaat Leivonnaiset, my all-time favorite Finnish baking book, and the other from Better Homes and Gardens.  I've made both of these before, but never on the same day.
In real life, I made the Finnish recipe first, but here I'll show you the BHG first, because it was really much better and easier to handle.  You can find the full, official recipe here.  Usually I take the metric recipe measurements and change them to cups, today I'll reverse that.
Cake #1
First, I separated 4 eggs, let them rest for 30 minutes, then beat them until soft peaks formed.  Then I added 1/3 cup (3/4 dl) of sugar and continued beating until stiff peaks formed.  The recipe said to beat the yolks first, but even the slightest bit of yolk gets into the whites, they won't beat as well.  I didn't want to do so much dish washing, so I reversed the order.  I moved the whites to another bowl, they looked like this: 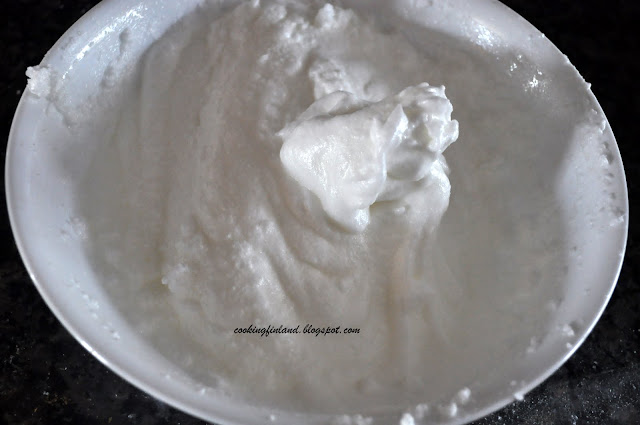 Next, I beat the yolks with a half cup of sugar (about 1 1/4 dl) and a 1/4 teaspoon vanilla until they were creamy looking, then folded them into the egg whites (carefully). 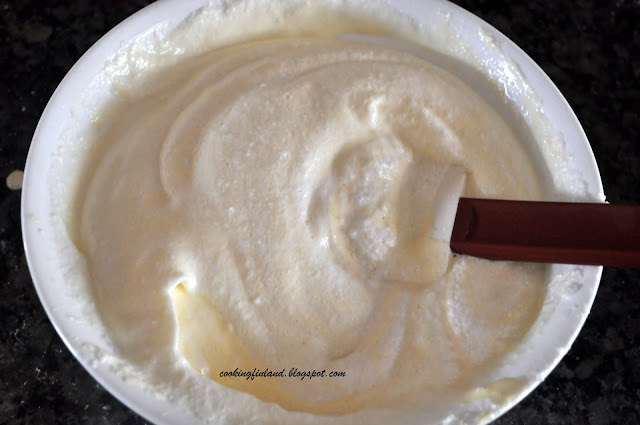 I mixed 1/2 cup (about 1 1/4 dl) of flour with a teaspoon of baking powder in a separate bowl, then folded this carefully into the egg mixture, without stirring more than necessary. 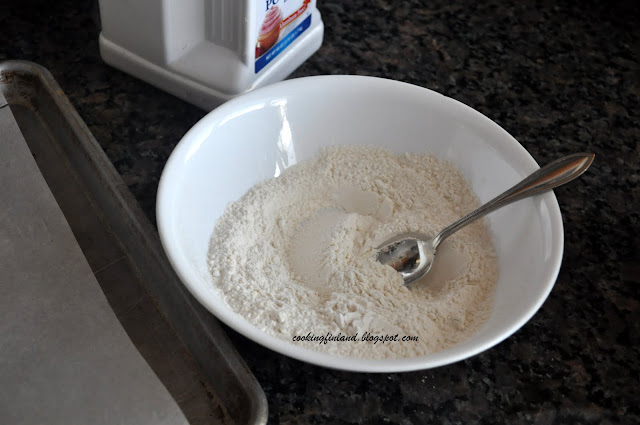 I lined a jelly roll pan with parchment paper, then sprayed the paper with cooking spray (or you could grease it a bit with butter or oil).  The parchment paper really helps with baking jelly rolls, and I like to go the extra step of putting a bit of oil on the paper, it really helps the cake release easily.  Bake the cake at 375 F (about 200 C) for about 12 minutes until the cake springs back when touched. 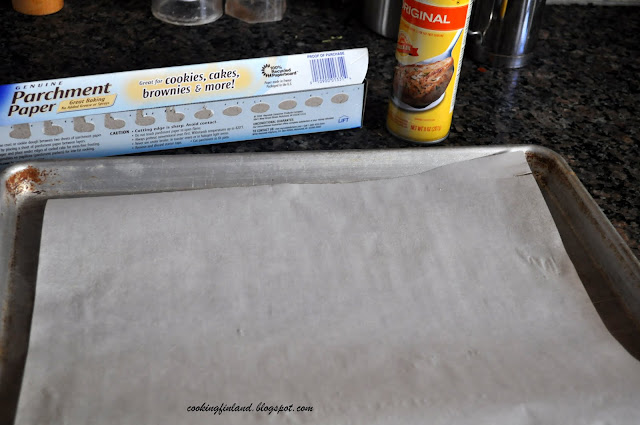 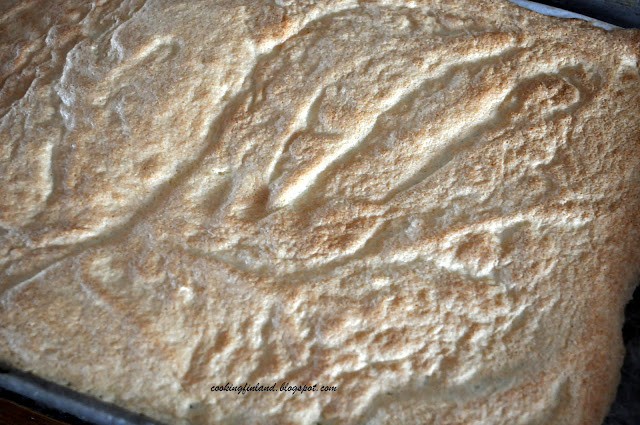 Next, I sprinkled the top of the cake with powdered sugar and laid a clean towel over it.  I rolled up the cake around the towel, and let it cool for a while.  If you want to fill the cake with whipped cream or ice cream, let it cool thoroughly.  I filled it with black currant jam, so it didn't have to be completely cool. 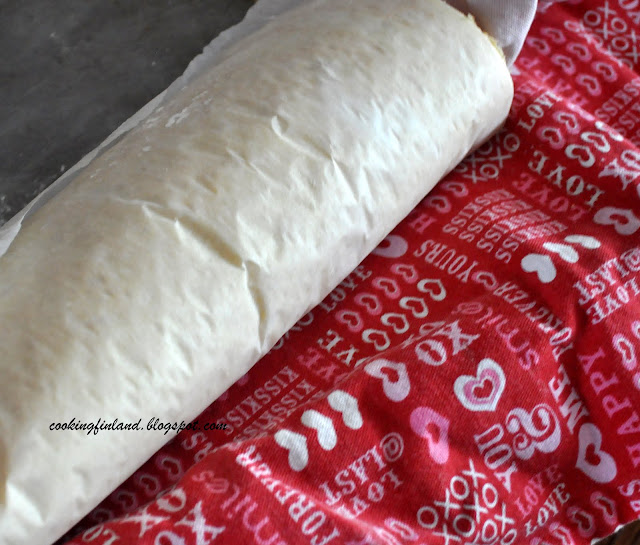 This is how the cake looked when I unrolled it.  I loosened the parchment paper carefully and completely, then spread black currant jam over the whole cake.  It was easy to roll back up because it had been cooled in a rolled shape. 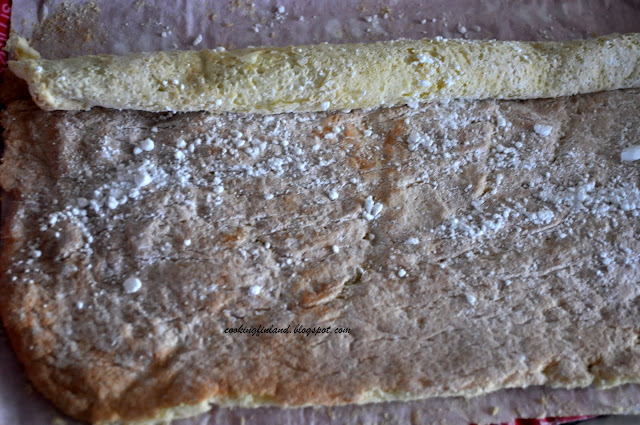 Cake #2
For the second cake, I used the Finnish recipe, which called for beating 3 whole eggs with sugar until they were creamy.  The amount of sugar in this recipe is interesting, 2 deciliters, which works out to .85 of a cup.  Almost exactly 1/2 plus 1/3 cup, just like in the American recipe.  When the eggs and the sugar were beaten, they looked like this: 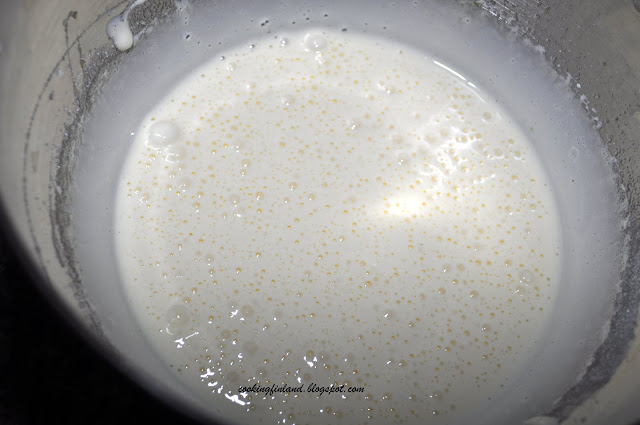 I mixed 2 deciliters of flour (1/2 plus 1/3 cup flour) with 2 teaspoons of baking powder (more flour and more baking powder than the BHG recipe) in a separate bowl and then folded them into the egg mixture.  At this point I was supposed to add 1/2 dl milk (about 1/4 cup), but I forgot and poured it out onto the parchment paper, prepared like for the first cake. 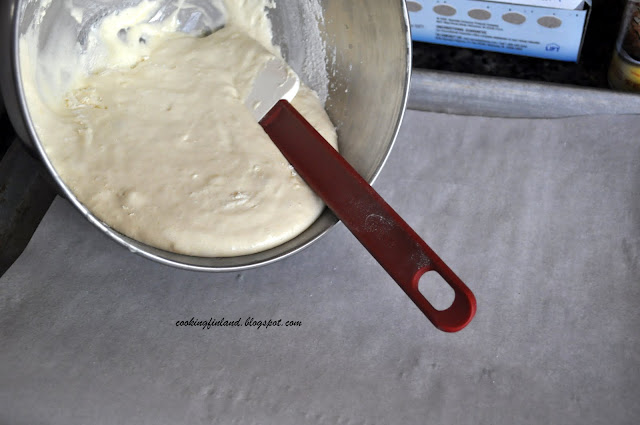 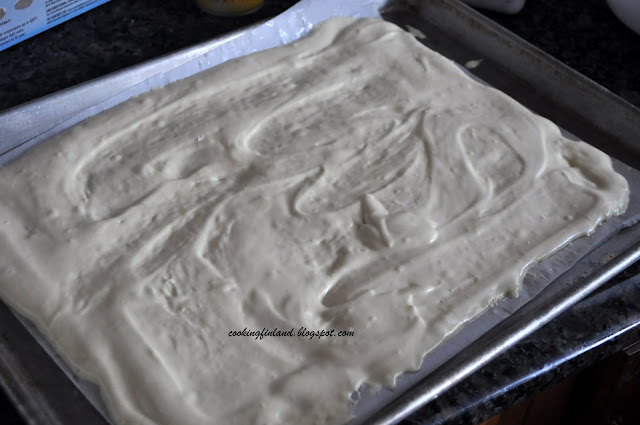 I baked it in the bottom of the oven, which was preheated to 500 F (250 Celsius).  This cake only needed about 5 minutes to bake. 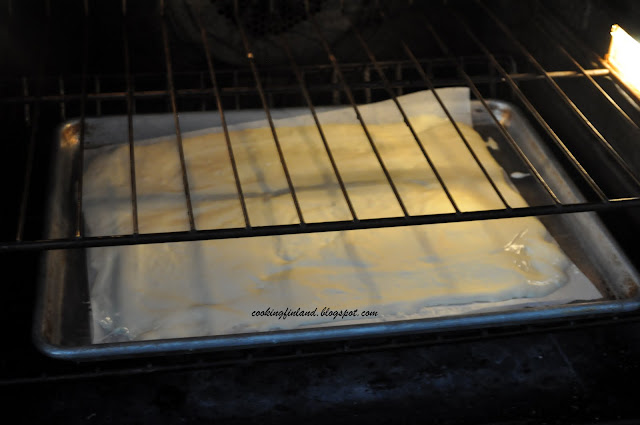 This is how the cake looked as it came out...slightly dry and heavy, probably from the omitted milk!  I went ahead and rolled this cake like the BHG one, and filled it with seedless raspberry preserves. 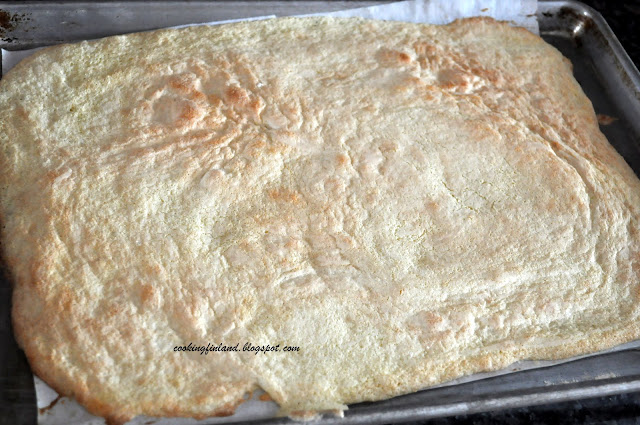 There was nothing to do but to start over.  I followed all the steps again, this time adding the milk as I folded in the flour.  This is what the resulting cake looked like: 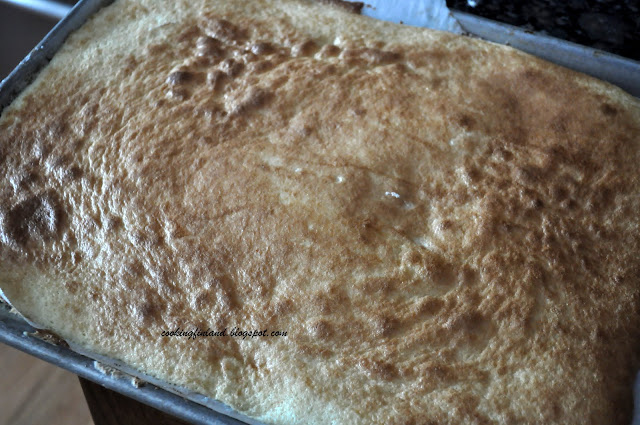 It required just a little more baking, but was still a little soft and was difficult to roll.  I filled this cake with strawberry preserves.

Here is a direct comparison of the two Finnish cakes, the one without the milk is on the left.  The one on the right with the milk was much fluffier. 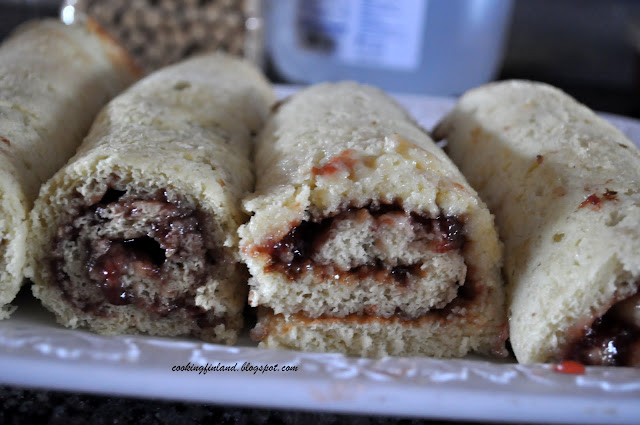 One final photo shows all the cakes side-by-side. The middle one is the BHG recipe, and the left is the one that didn't get any milk. 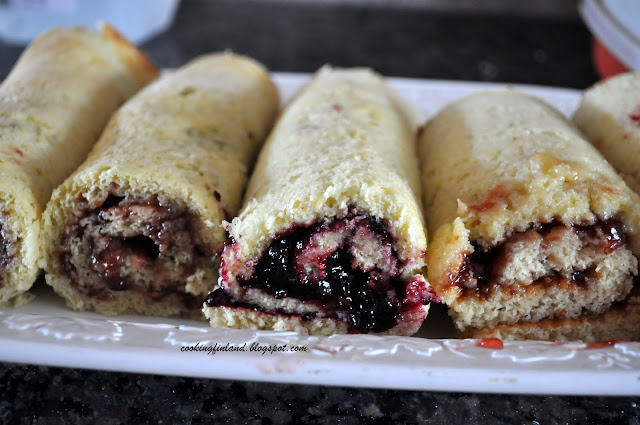 I was really lucky to have so many willing taste-testers for this little science experiment!  We had not only family, but good friends and neighbors tasting.  The vote was unanimous, the BHG cake won, but everyone thought it should have the strawberry jam filling next time.
My first try making a jelly roll, about a decade and a half ago (!), was with the Finnish recipe, and I was unable to get it to turn out right.  I didn't have a stand mixer, and didn't get the eggs whipped enough.  Then I tried the BHG recipe and had no problem with it, even though I was not an experienced baker at that point.
It would be great to hear thoughts from both my Finnish and American readers on this, which recipe do you prefer?
Posted by Elizabeth at 1:18 PM