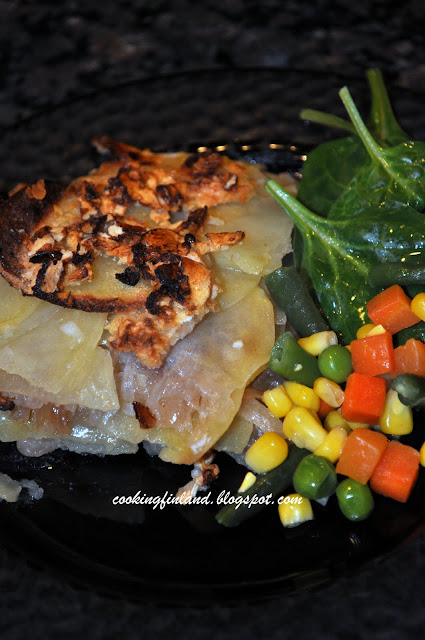 For supper we made Jansson's temptation, a delectable potato casserole with lots of onion and anchovies.  My daughter, who loves pickled herring, gravlax, cold-smoked salmon, sushi, etc., was a little worried about eating anchovies.  She said that her friends told her they were disgusting.  She loved this dish, just goes to show that any ingredient can be delicious if prepared correctly!
I used a recipe out of an old Time/Life book, but changed some ingredients to fit what I had in stock.  The original recipe is:
7 medium boiling potatoes, peeled and cut into strips 2 inches long and 1/4 inch thick
2 1/2 tablespoons butter
2 tablespoons vegetable oil
2 to 3 large yellow onions thinly sliced (4 cups)
16 flat anchovy fillets, drained
white pepper
2 tablespoons fine dry bread crumbs
2 tablespoons butter, cut into bits
1 cup heavy cream
1/2 cup milk
I started by slicing onions, I used an old mandolin to slice them quickly and very thin.  I have a much newer mandolin that isn't stained up, and was much more expensive, but this old one that was "as seen on TV" and purchased at an outlet mall some 15 years ago is the one I prefer.  I used red onions because that is what I had.  They lost most of their color when I sauteed them, anyway, I don't think it was an important difference.
I also peeled about 8 yukon gold potatoes, I prepared the dish rather quickly, otherwise you would want to soak them in cold water so they don't turn brown. 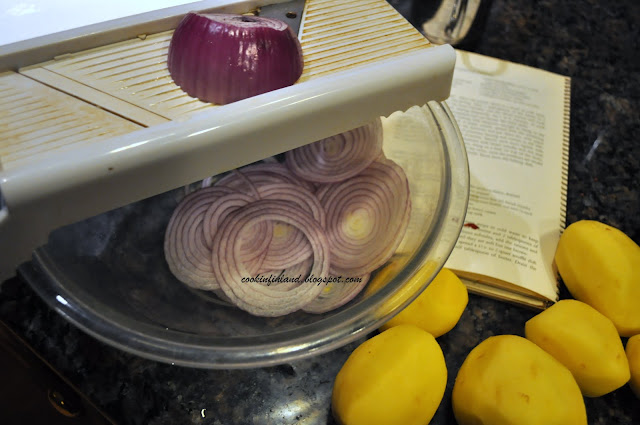 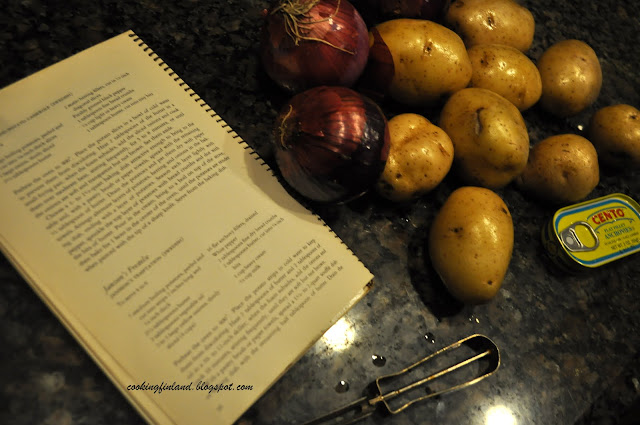 I have given up on all of my nonstick pans.  The old nonstick pans have a toxic coating, and my newer "green" ones are barely nonstick at all.  I have a full set of cast iron pans that belonged to my paternal grandmother, and if you treat them correctly, they cook so much better than the new pans.  I originally was afraid to cook on the glass cooktop with these pans, but I have been careful and haven't caused any damage (yet).  Cast iron cookware is not for procrastinators, though, it is important to clean them right away, without using any dishwashing detergent.  Also, put them back on the hot burner to dry thoroughly before putting them away, or they will rust.  The turner that I am using here actually was a brownie server that belonged to my maternal grandma...it works great to scrape the bottom of the pan! 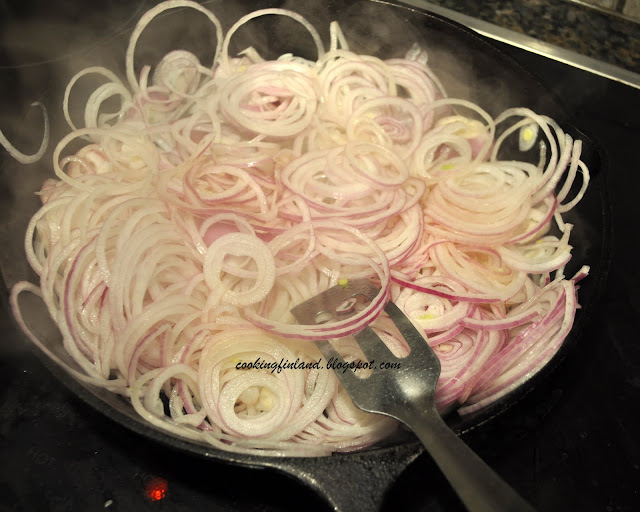 After preheating the oven to 400 F, I used my mandolin to slice the potatoes directly in the buttered baking dish.  (If you cut up the potatoes earlier and soaked them in water, dry them before putting them in the dish)  This is what the first layer looked like: 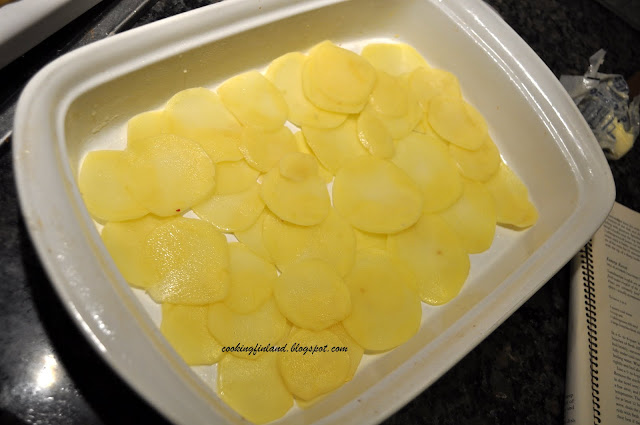 Next, I layered on 1/3 of the onions and some sardine slices: 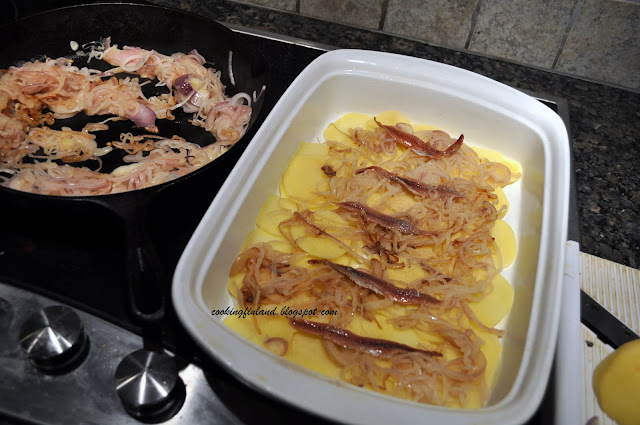 After sprinkling this with white pepper and just a little salt (remember that the anchovies add quite a bit of salt to the dish), I repeated the layers two times, then ended with a layer of potatoes.  White pepper is a little spicy, but we enjoy its flavor.  I didn't have bread crumbs, and was in a hurry, so I crumbled up some saltine crackers and dotted the top with butter: 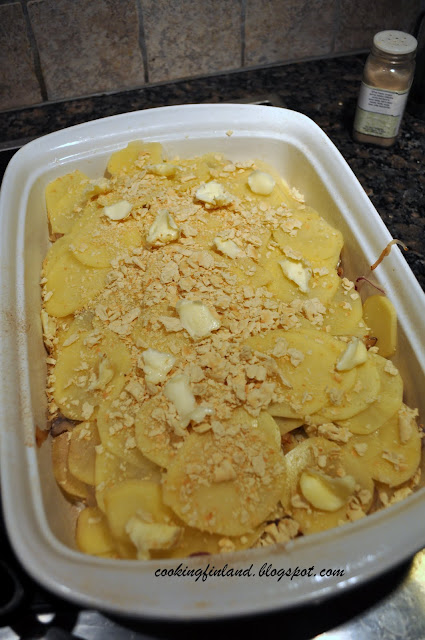 I checked the carton of cream in the refrigerator and it was spoiled!  Not to panic, I put about 3/4 cup of powdered milk in a measuring cup and added skim milk to equal 1 1/2 cups.  I've used this substitute lots of times, it adds calcium to the dish and greatly reduces the fat content.  I heated the milk in the microwave for a couple of minutes, then poured it over the casserole and baked it for about 45 minutes. 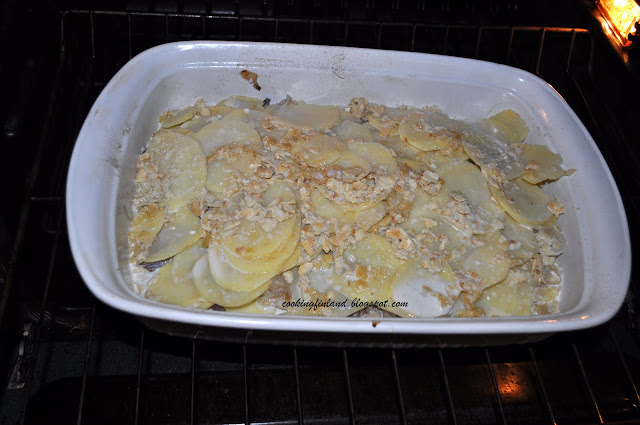 The topping got a little overdone, I think my oven temperature might be a little higher than the thermostat reads.  Next time, I will probably cover it for half of the cooking time.
Even with all of the substitutions, the dish turned out really good.  This was a hearty, warm supper that was perfect for a traditional sauna evening.  A fun way to teach the kids about their heritage!
Posted by Elizabeth at 8:46 AM